Nina Arianda took home her first Tony Award for "Best Actress in a Leading Role in a Play" at the 2012 Tony Awards on Sunday night in NYC. Nina originated the award-winning role of Vanda in David Ives’ "Venus in Fur" off-Broadway in 2010, before taking it to Broadway in 2012. 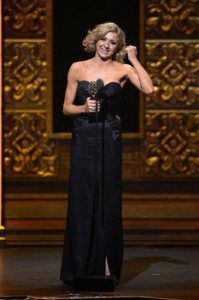 This is Nina's second "Best Actress" nomination. Nina earned her first Tony nomination in 2011 for her portrayal of Billie Dawn in "Born Yesterday".

After seeing her perform on Broadway, Woody Allen cast Nina in his Oscar-winning film Midnight in Paris. She has also appeared in the feature film Tower Heist starring Ben Stiller and Eddie Murphy, the independent film Win Win starring Paul Giamotti and on ABC's hit TV series "The Good Wife".

Nina Arianda has taken the press by storm. She has been compared to a young Meryl Streep, appeared on the cover of Time Out NY, featured in the Wall Street Journal, named in Forbes “30 Under 30”, graced the inside of People magazine and has been hailed in more reviews than we can count.

The New York Times declared earlier this year, “Ms. Arianda is giving the first must-see performance of the Broadway season, a bravura turn that burns so brightly you can almost feel the heat on your face."