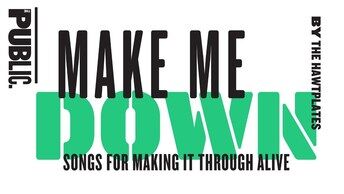 Kenita Miller-Hicks ’00 created and performs in The HawtPlates’ world premiere visual EP, Made Me Down: Songs for Making it Through Alive, now available on The Public Theatre’s YouTube page. Kenita will also appear in the cast of the upcoming film adaptation of Tick, Tick...Boom!

Performed on NBC’s Rockefeller Tree Lighting special on December 2! Morgan, Jarvis and Taylor performed with Broadway’s Ain’t Too Proud and Cassidy danced with Meghan Trainor. Cassidy performed on the TODAY show this week, and in the music video for Meghan Trainor’s new single “Holidays” with Earth, Wind & Fire.

Will join CBS’ The Talk as a full time co-host starting in January! Amanda has been a frequent guest co-host on the show over the past few months.

Featured in Elegies for Angels, Punks and Raging Queens, benefitting Broadway Cares/Equity Fights AIDS. The stream aired December 1 and will be available through tomorrow, December 5.

Teddy is the guest on this week’s episode of At This Performance… S.N.O.B. (Saturday Noon on Broadway) series. Tim leads the series, available on the Broadway Up Close Instagram page. Tim created Broadway Up Close Walking Tours in 2010.

Spoke for a YouTube live chat on November 30 called “Live Colorfully,” talking about topics including owning your story, finding your voice, and inclusivity. The conversation is available on YU-project, named after the movement that Minami created.

Wrote, directed and stars in the play “Untitled Monologues,” streaming as part of Rogue Theater Festival’s 2020 lineup on December 12 at 1 PM EST. Alexis Labarba ’14 and Anne Windsland ’13 will also perform in the play.

Stars in Rise Up: A Tectonic Cabaret, streaming free on Tectonic Theater’s YouTube page on December 9 at 7 PM EST. Mauricio, Jacob Smith ’09 and Sarah Stiles ’00 star in the new soap opera-inspired podcast ‘As The Curtain Rises.’

Sheridan is on the Advisory Committee for The Australian Theatre Festival, and performs alongside Jessica in the festival’s online cabaret. Emilio will perform in “Stranded.” The virtual festival takes place December 4 - 5.

Joined together for “But...I Survived,” a video released on November 20 in recognition of the 2020 National Transgender Day of Remembrance. Mila and Peppermint star in the video, and Josh was Director of Photography and Editor for the powerful project.

Narrated the newly released audiobooks The Spirit of Creativity: Inspirational Poems for the Creative at Heart and Veil of Shadows available on Audible. Check out more of her audiobook narrations and voice actor work here.

Is a guest on the latest episode of ITCAF Podcast. Luke plays “Solomon” in the upcoming drama Safety, based on the true story of former South Carolina Clemson Tigers safety Ray McElrathbey. The film hits Disney+ on December 11.

Guest starred on a new episode of her brother’s podcast, Making a Living Show. Caissie teaches masterclasses for Professional Performance Prep (The Prep) on Wednesdays through mid-December.

Created the band The Late Great Charlie Borski and recently signed with Mannequin Vanity Records. They released the music video for their first single, “Let’s Hit The Road,” available on all streaming platforms. They will release their first full album in early 2021.

Released the official music video for his new single with Nuka, “Love Not War.” Janeeva Pettway ’16 performs in the music video. Jason spoke about new music and TikTok in a Zoom interview with Elvis Duran and the Morning Show.

Perform as the R&B duo Don’t Leak. They released the music video for their new song “Permanent.” Fellow alumni Andre Malcolm ‘15 and Arianne Meneses ‘15 directed, choreographed, and performed in the music video.

Is featured in the 10th anniversary album re-release of “The Trumpet of the Swan,” available for purchase and streaming. Jesse was a guest star on Submissions Only, now available to stream on BroadwayOnDemand.com. Jesse is also a featured performer at the Ars Nova Forever Telethon, a 24- hour live stream from December 4 - 5.

Published her children’s book series she wrote and illustrated, The Adventures of Marlz. Chasity started developing the series while a student at AMDA. The four books are based on adventures she took in LA.

Modeled in a featured photo spread for The Ensemblist. Ashley performs in Like After Death, a dark comedy short film streaming on All Together Now, an interactive virtual theatre space. Tickets are on sale for showings on select dates from December 4 - 17.

Was the moderator and presenter at the Forum Internacional do Entretenimento in São Paulo, broadcasted on November 22. Livia was Resident Director of Summer: The Donna Summer Musical in Brazil.

Named to the 2021 Forbes 30 Under 30 list in Hollywood & Entertainment. Jeremy was also featured on Out Magazine’s Out100 List for 2020, recognizing prominent members of the LGBTQ+ community for their "groundbreaking, ripple-inducing, and culture-shifting impact around the world.”