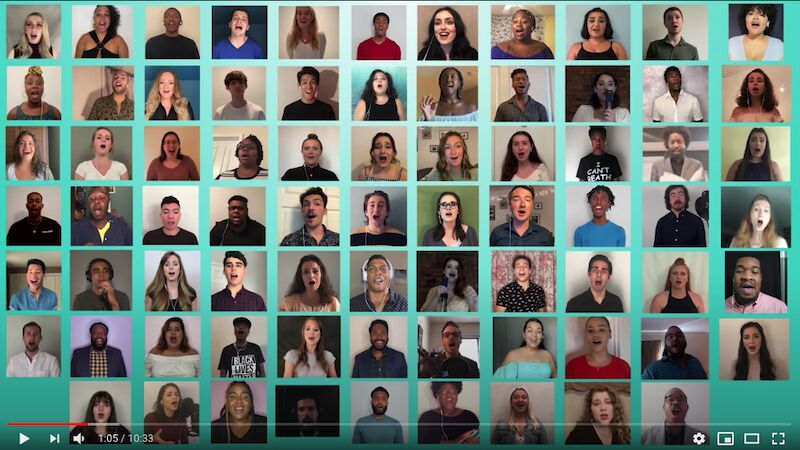 Conor Stepnowski ’19 created and directed Ragtime: A Virtual Medley, a virtual theatrical experience unlike any other in hopes of paving the way towards a new American dream! Over 50 AMDA alumni contributed their talents to this special project. Watch the full performance here!

Stars in the indie thriller Bad Impulse, set for a December 18 theatrical and on-demand release. Paul plays “Grandpa” in the upcoming film Most Guys are Losers, co-starring his daughter, Mira Sorvino. Watch the trailer here!

Joins the cast of Like After Death, a dark comedy short film project set to stream through All Together Now, an interactive virtual theatre space. Presented by Heredia Vision, tickets are now on sale for showings on select dates from December 4 - 17. Ashley starred as “Peggy/Maria” in the Hamilton San Francisco cast, played “Janelle” on Broadway’s Beautiful: The Carole King Musical alongside Housso Semon ’11, and was a standby for “Regina” and “Gretchen” in Broadway’s Mean Girls.

Will be a recurring character in season 4 of HBO’s In Treatment. Anthony stars in Honest Thief, currently in theatres. The film climbed to number one at the box office shortly after its theatrical release.

Reunited with fellow Broadway cast members of Tootsie on the November 12 episode of Quarantine, Cabaret, and Cocktails. Sarah, Mauricio Martinez ’99, and Jacob Smith ’09 star in the new soap opera-inspired podcast ‘As The Curtain Rises.’ The first two episodes are now available on The Broadway Podcast Network and streaming platforms. The remaining two installments will be released on subsequent Thursdays.

Co-created and stars in the true crime mockumentary “Murderville,” which premiered on Monday. Episodes will be released periodically until December 19 on the Instagram page @instaminiseries. Last year, Ginger wrote and starred in the thriller short film Four and was a guest performer on Broad City.

Will be a featured guest in Food & Wine’s CLASSIC AT HOME holiday-themed virtual event on December 5 at 5 PM EST. Jesse is featured in the documentary One Night Stand, being presented on November 24 on BroadwayHD.

Spoke with BroadwayWorld’s Backstage Live about his RadioFree Birdland show, The Christopher Sieber Special which premiered on November 5. The concert is available On-Demand through December 5.

Discussed her journey performing in 5 Broadway shows in just 16 months as a guest on the podcast, You Booked It. Maria recently performed in a Time Warp parody titled "Let's Light the Polls Up Again!"

Won a 2020 Jeff Award for Best Leading Actor for his performance as “Jerry Mulligan” in An American in Paris at the Drury Lane Theatre. Josh performed in a virtual collaboration between artists in Vietnam & New York called DANCING THROUGH... on October 30. Michael Mindlin ’03 choreographed the project, which goes through the history of Broadway dance.

Teamed up with her Ladygang podcast co-hosts and Leatherology to create a gift set for the Gift Joy campaign. 50% of net proceeds for each gift set will benefit the non-profit A New Way of Life Reentry Project. Ladygang recently celebrated 100 million downloads.

Is a member of the Advisory Committee for The Australian Theatre Festival. The festival will be presented virtually on December 4 and 5, featuring Australian artists and stories. Sheridan, Brandon Armstrong ‘12, and Jennie Harney-Fleming ‘10 starred in the Puerto Rico Benefit Tour of Hamilton.

Associate director of GHOST THE MUSICAL, opening in Mexico City on December 16, 2020. Silvia was the Spanish language translator and resident director for the production of GHOST in Spain, as well as The Addams Family and Young Frankenstein. She won a BroadwayWorld Award 2020 for best adaptation for The Bodyguard tour in Spain.

Is now a published author! The first edition of her series Behind These Walls is available on Amazon. Last year, Haylee performed in ANN at the Hudson Theatre Guild, written by and starring Christian Clinton ’18. Olivia Durfey ‘17 directed the production, Paulina Tobar ’18 stage managed, and Kate Morrisey ’17 and Alexander Black ’18 were also featured performers.

Set to launch a fitness app next year, offering his Torch’d training videos at an affordable price. Isaac was featured in a SHAPE article about how his daily Instagram workouts on @isaacboots have raised almost $1 million for No Kid Hungry.