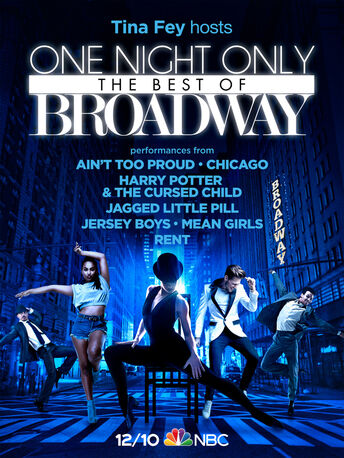 Adante Carter ’14, Jarvis B. Manning Jr. ’06 and Jesse Tyler Ferguson ’95 will appear in NBC’s One Night Only: The Best of Broadway on December 10 at 8 PM EST. Celebrating the resilient Broadway community, the two-hour special will benefit Broadway Cares/Equity Fights AIDS. Cast members from several Broadway productions—including Ain’t Too Proud–The Life and Times of The Temptations, Chicago, Jagged Little Pill, Diana: The Musical, Jersey Boys, Mean Girls, and Rent—will take over the streets of Manhattan with special performances.

Will star as “Michelle” in Showtime’s upcoming pilot American Gigolo, a present-day reimagining of the 1980 film noir. Gretchen is in the film False Positive, currently in post-production. Gretchen starred as “Nancy” in a virtual reading and Q & A of Kenneth Lonergan's Hold on to Me Darling in October.

Will perform as “Young Adele” in Voyeur: The Windows of Toulouse-Lautrec, an outdoor performance in Greenwich Village this December.

Plays “Stella” in Season 2 of the YouTube series, Angry Birds on the Run. Kate is a professional voice over artist signed with Soho Voices.

Made a special appearance at the In Stitches virtual benefit for Hydrocephalus Association on November 19. Jesse will be a featured guest at Food & Wine’s CLASSIC AT HOME holiday-themed virtual event on December 5 at 5 PM EST.

Choreographs the upcoming Christmas musical The Nice List, which announced a December 1 release date. The musical will be available for free on YouTube through the month of December. Michael choreographed “Free Country” for DANCING THROUGH... in October, featuring Josh Drake ’11 as a performer.

Spoke about upcoming music and TikTok in a Zoom interview with Elvis Duran and the Morning Show. Jason drops his new single “Love Not War (Tampa Beat)” today, November 20!

Released the recording and music video for new single “I Know” about self love and settling for nothing less. The recording is available on SoundCloud and the music video is on her YouTube channel.

Released the video for his new single “Let Me Carry You This Christmas,” available across digital platforms. Darius’ “Let Me Carry You This Christmas” RadioFree Birdland special will air on December 10 at 7 PM EST. Darius was featured on the November 16 episode of Pajama Cast Party and on Stars in the House’s “Vote-a-Thon” Highlights program on November 13. Marissa Jaret Winokur ’92 and Schele Williams ’91 were also featured in the 10-hour “Vote-a-Thon” on November 3.

Minami is the guest on this Saturday’s episode of At This Performance… S.N.O.B. (Saturday Noon on Broadway) series. Tim leads the series, available on the Broadway Up Close Instagram page. Tim created Broadway Up Close Walking Tours in 2010.

Announced as the 2021 Season Director of the South Dakota Shakespeare Festival. Oliver won first place in the 2020 Stage Directors and Choreographers Society Fellowship Event at the Kennedy Center American College Theatre Festival, Region 5. Oliver is an MFA Directing Candidate at the University of South Dakota.

Directed the virtual Ronald McDonald House 28th Annual Gala on November 16. The theme of the evening was “families for families,” and donations support families battling pediatric cancer. Viewers can watch the event and make donations for the next 30 days. Schele is currently working on a children’s book about the history of slavery.

Is the author of the children’s book ABC Adventures with Fuzzlewump and Gizzlegrump. Her book just won the 2020 Moonbeam Spirit Award in the “Exploration” category.

Assistant Director of The Fresh Prince of Bel-Air 30th anniversary special, which is now available on HBO Max. Watch the trailer here. Cameron played “Dre” on BET’s Boomerang and is in the writers’ room on Netflix’s Gentefied.

Partnered with Backstage to launch Backstage in Latin America. Valentina founded the organization GO Broadway, which provides masterclasses and other educational opportunities to young theatremakers.