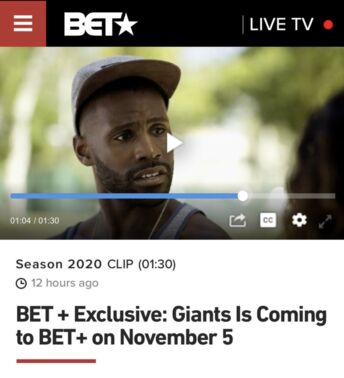 Guest co-hosted on Thursday and Friday’s episodes of The Talk. Today’s episode marks her fourth co-hosting engagement with the show. Amanda is currently writing her memoir Live Your Life: Loving And Losing Nick Cordero, set to be released on June 29, 2021.

Stars as “Abbie Quinn” in Midnight at the Magnolia, coming to Netflix this month. Natalie also stars as travel and lifestyle blogger “Aubrey Langin” in Lifetime’s A Very Charming Christmas Town, premiering on November 8 at 8:00 PM EST.

Is featured in One Night Stand, the documentary that gives a behind-the-scenes look at New York's 24 Hour Musicals. The documentary will be presented on November 24 on BroadwayHD. Jesse was featured in Travel+Leisure’s article, “How ‘Modern Family’ Star Jesse Tyler Ferguson’s Travels Inspired Him to Write a Cookbook.” He is co-creating the cookbook with Julie Tanous, who he also shares the food blog Julie & Jesse Cook.

Producer of Sundogs, a virtual presentation benefitting Stop Soldier Suicide and The WDA. Sundogs stars Armie Hammer, Jenn Gambatese, Jordan Bridges and will premiere on Play-PerView on Sunday, November 8 at 7:30 PM EST and on Video on Demand from November 9 - 12. To purchase tickets, click here.

Joined a virtual collaboration between artists in Vietnam & New York for DANCING THROUGH... which premiered October 30. The show goes through the history of Broadway dance. Michael was a choreographer for the project, and Josh was a dancer. Michael choreographs the upcoming Christmas musical, The Nice List. Shot over Zoom, the musical imagines what would happen if Santa supervised the North Pole remotely and left the elves in charge. The release date will be announced soon.

Were featured in Stars in the House’s 10-hour “Vote-a-Thon” on November 3. Marissa and Peppermint ’99 performed in the Rocky Horror Show Livestream benefitting The Democratic Party of Wisconsin. Schele and Darius are founding members of BLACK THEATRE UNITED, which have hosted virtual Town Halls over the past few months. Schele is also currently working on a children’s book about the history of slavery.

Is a member of the popular K-pop girl group Secret Number, which released the music video for their new single “Got That Boom.” Secret Number made their debut earlier this year with the track “Who Dis?”

Released her new original single, “Looking Up.” Watch the music video and listen to her interview with Canadian radio station 1050 CJN here. Shantelle released her debut solo album in 2015 and her single “Gone” in 2017.

Is the Marketing & Social Media Director of the Grand Theater in Williamstown, New Jersey. Lauren was featured in an interview, discussing more about her involvement with the Grand Theater and the programs they are offering during the pandemic.

Was featured on RADIO.COM LIVE Check In with Jason Derulo on November 4. Jason has been nominated for a 2020 YouTube Streamy Award in the crossover category for his success on Tik Tok and for NRJ Music Awards’ “International Male Artist of the Year.” Jason will perform on the CD, Diane Warren: The Cave Sessions Vol. 1, coming out in 2021.

Will be the Master of Ceremonies at the KeyNote Women Speaker’s Equity In Action event on November 20. Kamil is the Founder & Artistic Director of Haque Centre of Acting & Creativity (HCAC), Singapore's first professional acting school. Kamil has coached over 2000 students and has produced, directed and acted in several award-winning and critically acclaimed productions in the USA and across APAC.