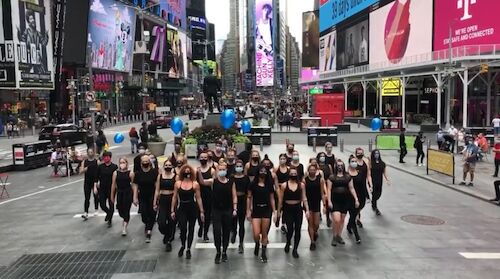 Jena VanElslander ’04 released the 13th installment of The TSQ Project 51 talented dancers have taken part in the project over the past few months, with the goal of bringing light and movement back to Times Square while Broadway is dark. Jena is a faculty member at AMDA NY. She made her Broadway debut in The King’s Company production of King Kong – Alive on Broadway.

Will lead one of her signature AK Dance! cardio workouts for Women’s Health LIVE on October 6 at 6 PM EST. Amanda offers an online subscription series to her AK! Rope, AK! Dance, and AK! Body fitness classes.

Will be the keynote speaker for The TheaterMakers Summit, an inclusive virtual event presented by Broadway producer, Ken Davenport, for theater makers of all kinds. This event is designed to help theatermakers work through this challenging time and hit the ground running when theaters reopen.

Performs in the new “I Am America” music video, produced by The Ensemblist to encourage Americans to vote. Karli is a current cast member in Broadway’s Moulin Rouge!

Was featured in Lady Gaga’s "911" music video While at AMDA, Lauren performed original songs on guitar at Cafe Performances. She will be releasing new original music next month.

Is featured in Spotify’s campaign 'Lo Nuestro Es Arte' to celebrate Latinx Heritage Month. Also in celebration of Latinx Heritage Month, Anthony, Christopher Jackson ’94, and Mauricio Martinez '99 will perform in ¡VIVA Broadway! Hear Our Voices alongside other award-winning stage and screen Latinx talent. The concert streams on Playbill.com and Playbill’s YouTube Channel tonight, October 1 at 8 PM EST, and will remain available until October 5 at 8 PM EST.

Announced as cast members for BITE-SIZED BROADWAY Musical Podcast Ten episodes are set to premiere on all major streaming platforms beginning October 5. Each 50-minute episode will feature a 10- to 20-minute mini-musical and an interview with the show’s creators.

Has joined Broadway Cares/Equity Fights AIDS’ Board of Trustees and is currently working on a children’s book about the history of slavery. Schele and fellow alumnus Darius de Haas '91 are founding members of BLACK THEATRE UNITED.

Recently competed in the Miss Hong Kong 2020 Contest. She made it to the top 15 and was signed to be a contract artist with TVB, a television broadcast company in Hong Kong.