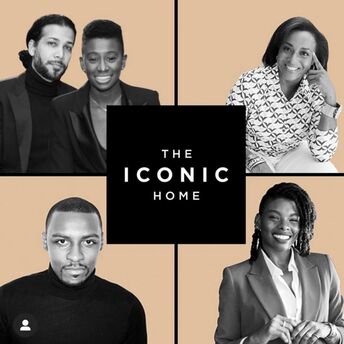 Anthony Dunning ’06 is one of 16 designers around the country working on “The Iconic Home” with Architectural Digest and BIDN. Anthony is the owner of Trader’s Haven Design (learn more here), a design firm based in NYC.

Stars in Honest Thief (learn more here), which climbed to number one at the box office following its theatrical release. Anthony recently appeared on The Kelly Clarkson Show and performed his new hit “Stop.”

Stars in One Royal Holiday, now set to premiere on Hallmark on October 31 at 8PM EST. Go behind the scenes (learn more here) with Krystal and the cast! Krystal joined a virtual event hosted by VoteRiders, writing letters to voters in key states to educate them on voter ID laws and deadlines ahead of the 2020 presidential election.

Was recently a contributing artist on the new game show Director vs. Director. Two directors and their teams of artists have 3 hours to create art and then perform the results, streamed LIVE. The audience votes for the winner. Additionally, J. Elaine, Cassidy Layton ‘16, Karli Dinardo ‘13, and Jay Paranada ’07 are cast members of BITE-SIZED BROADWAY Musical Podcast (learn more here). The season will consist of ten episodes premiering on all major streaming platforms.

Stars in "Oscar & Walt" (learn more here) in the New Works Virtual Festival. Sam performed in "Step to the Left: Country for Liberals" in September. In June, Sam participated in a reading as part of 2020 Summer Nostos Festival’s Selected Shorts.

Performs in the virtual premiere of Women of Color on Broadway (learn more here) on October 21 as part of ALL ARTS’ House Seats series. Last week, Anastacia performed in Times Square with other Broadway community members in NYCNext’s first “A Moment for Broadway” event. This begins a series of spontaneous performances throughout the city, not advertised beforehand to ensure social distancing. Chris Sieber ’89 was also in attendance.

Stars as “Chase” in Teen Angel: A Short Play (learn more here), presented by The Trailblazers Collective on October 24 at 7:30PM EST. Loosely based on themes from It's a Wonderful Life, Teen Angel follows “Chase,” a young gay man, as he navigates his sexuality and mental health with the help of three angels-in-training. Last year, Bobby performed in the production of Teen Party Massacre at St. Luke’s Theatre.

Released her new single “Concrete Stars” last Friday! The world premiere was featured on Popdose (learn more here). This track is part of her upcoming EP, The Well.

Stars and performs in the music video “Never Forget Who You Are” (learn more here) from the upcoming musical Singing Revolution: the Musical, inspired by the 1987-1991 Estonian “Singing Revolution” and written with a Europop score. The premiere is set for Los Angeles in 2021. Kristi produced and starred in the short film Wildflower, which most recently premiered at the 20th FirstGlance Film Festival in Los Angeles in March.

Released her new single “The Devil” (learn more here) last week. This is the third single she has released while working on her original music during these past few months. Her music collection is available on Spotify and Apple Music.

Recently released the music video for her new single “Used to Be,” (learn more here) inspired by her mother’s battle with Frontotemporal Dementia. Her music is available on Spotify and Apple Music.

Creative producer of America's Got Talent and American Idol and producer, director, and designer for various live tours and television performances for Lionel Richie, Keith Urban, Westlife and Pitbull. Brian also served as the executive producer of Las Vegas’ CELESTIA and co-executive produced La Banda on Univision, which received an International Emmy nomination.

Is writing her memoir Live Your Life: Loving And Losing Nick Cordero (learn more here), set to be released on June 29, 2021. Amanda is the latest cover star of People (learn more here), and she discusses more about her journey this past year in an uplifting video interview. Her cover hits newsstands today.

Celebrates 100 million downloads for the podcast she co-hosts, The Ladygang. Becca will star as a series regular in Disney+ upcoming series reboot of Turner & Hooch! (learn more here)

Appeared as a guest on The James Beard Foundation’s Taste America (learn more here) virtual dinner party on October 18. The event featured local chefs from over 20 cities across America, and supported the foundation’s Open for Good campaign, helping restaurants survive during the pandemic and building a sustainable restaurant industry for the future. Jesse performed in FORWARD. TOGETHER.  (learn more here)on October 20 in support of The Public Theater.