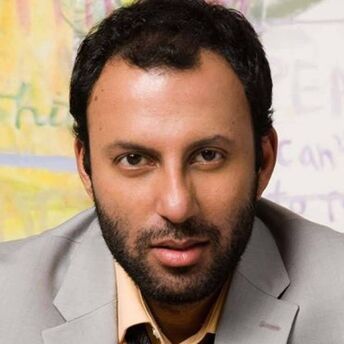 Rizwan Manji ’94 will star in the upcoming drama film Basement, based on Robert Rosenbaum’s Off-Broadway play of the same name. After a bombing, nine neighbors are trapped in a makeshift bomb shelter and must work together to survive the night… and each other. Rizwan’s son will also star in the movie.

Rizwan played “Ray Butani” in Schitt’s Creek, which set a new record for most Emmy wins in a single season for a comedy series!

Announced to star as a series regular in Disney+ upcoming series reboot of Turner & Hooch! Becca was a guest speaker in the “Production Flow: Demystified” conversation this week for the 42nd edition of IFP Week.

Stars in One Royal Holiday, premiering on the Hallmark Channel on November 1 at 8 PM EST. Krystal and Hailey Kilgore performed at a Belting for Biden Event earlier this month on Broadway for Biden’s YouTube and Facebook.

Stars in DEVOUR Food’s 'When Hunger Attacks: Safari' commercial. Chloe won LA’s Next Stage Star 2019 and is represented by FireStarter Entertainment for Stage, Television, and Film, A3 (Abrams Artists Agency) for Commercial, and DDO Artists for Voiceover. Chloe also does commissioned pet portraits.

Stars as travel and lifestyle blogger “Aubrey Langin” in Lifetime’s A Very Charming Christmas Town, premiering on November 8 at 8 PM EST. Natalie also stars as “Chloe” in You’re Bacon Me Crazy and “Hayley Hammond” in Sincerely, Yours, Truly which aired earlier this year.

Will perform in LOST & FOUND: The Unsung World of Frank Wildhorn tomorrow, September 26 at 7 PM PST. Bobby and Alex produce and co-host the virtual concert, featuring performances of lesser-known songs by the Broadway composer. Tickets are $5 per household on Eventbrite, and the link remains active until midnight on September 28.

Created Russo Richardson Productions, which will present a full-scale virtual production of HEATHERS. Their production company has gained a large following through a strong TikTok presence. Auditions were hosted on TikTok, as well. The cast consists of 24 performers from four different time zones and two different countries. More details to come…

Made his debut digitally with Broadway stars for the Brave Hearts for Broadway’s Let Us Entertain You concert on Wednesday, supporting The Actors Fund. Max is teaching online technique courses for the junior athletes on Canada's artistic swim team, via his family’s physiotherapy clinic, Craven SPORT Services. Max remained in New York City as a dancer following his AMDA graduation and has temporarily returned to Saskatoon amid the pandemic.

Starred in an all-black reading of an episode of Friends on September 22 via Zoom Where It Happens. Jeremy will star as “Sammy Davis Jr.” in the upcoming feature film Scandalous! about Sammy Davis Jr. and Kim Novak’s relationship.

Released the music video with Ari Lennox for their cover of "If You Want Me To Stay.” Each time the song is streamed, Crown Royal will donate to The Main Street Alliance’s national relief campaign to help bars, stages, and clubs at risk of shutting down due to the COVID-19 pandemic. Anthony and Christopher Jackson ’94 will perform in ¡VIVA Broadway! Hear Our Voices, a digital concert featuring award-winning stage and screen Latinx talent in celebration of Latinx Heritage Month and Latinx milestones in theatre. The concert streams on Playbill.com and Playbill’s YouTube Channel on October 1 at 8 PM EST, and will remain available until October 5 at 8 PM EST.

Has continued to advance in BroadwayWorld’s NEXT ON STAGE: DANCE EDITION COLLEGE COMPETITION. This week, votes are being counted and she is competing to make it into the top 5!

Teaches a “Comedy 4 Kids” course with New York Improv Theatre. Andrea has been with EIGHT IS NEVER ENOUGH Improv since early 2019.