AMDA celebrates alumnus Jason Bergund, best-selling author! Jason has written 8 books with his writing partner and wife Beverly West, including Please Don't Feed the Daisy: Living, Loving, and Losing Weight with the World's Hungriest Dog, Pug Therapy: Finding Happiness, One Pug at a Time and What Pets Do While You're at Work. Yes, he often writes about his real life adventures with his family of beloved dogs.

Jason's story is further proof that living authentically and doing what you love can bring great things. We were so excited to talk to Jason to find out how he embarked upon his journey as a writer. Here is his story in his own words.

Jason Bergund: "I moved to New York City the fall after graduating high school from a VERY small town in the Ohio valley (like, MINISCULE). My parents put me on a plane and I flew alone to my new home in NYC to attend AMDA. I was 18 and this was only the second time I'd been to New York city. It was scary and thrilling at the same time. I came to AMDA as a dedicated dancer and remember my two years there very fondly. The faculty was fantastic. I made many lifelong friendships there and learned how to love and live in this great city. Especially the Upper West Side, where I've lived the last 14 years (aside from two years in midtown, lol.)

Upon graduating I acquired the usual "pay the rent" jobs and began auditioning. Some things I nailed, some I flopped. I absolutely LOVE dancing and the theater but to be honest, at a point I had that realization that "this is just not for me." Until I figured out my what the hell I was going to do with the rest of my life, I landed a nice office job. Although it was not my passion and I really didn't like it, it paid the rent and allowed for some security and relief. Then 9/11 happened and everything everyone knew, or thought they knew, in this city changed in an instant. So did my life. I lost many things that day and the days that followed. My sense of security, my job, my dog, my relationship, my good friend Becky (who I attended AMDA with), my apartment and my sanity. It was a horrible time for everyone here and I felt lucky that I escaped with my life.

I moved in with my best friend Bev. We were both still shocked and numb like everyone else. I found another office job but I was quickly fired because I just couldn't show up. I'd pretty much hit rock bottom and it's in those times that great things can happen.

Bev is a successful writer and encouraged me to explore my love of writing. Soon we started writing together and before we knew it we sold a book together! Things were changing. We adopted a Chihuahua named Daisy, yes, because of my love for the musical Side Show, and later a pug named Elvis, who is without a doubt the world's most handsomest pug. We published a book about Elvis called Pugtherapy, because he really was good for the soul. Before we knew it we were becoming a family and apparently so were Elvis and Daisy, because one Thanksgiving when we least expected it, Elvis got Daisy pregnant and we wound up with four chug puppies. Friends adopted two of the puppies, and we kept two, Bert and Buddha. Now we were the proud parents of an intact dog family, which has been an experience like no other, and has taught both Bev and myself a lot about what it means to be a family. So of course, we wrote about it! While Daisy struggled to drop the baby weight, we published a book called Fat Daisy, Inner Beauty Secrets from a Real Dog. I asked Bev to marry me and she said YES! To celebrate, we adopted a cat, Hamlet! I know, we’re nuts! We then published our bestseller, What Pets Do While You're at Work. While planning our wedding we wrote Brides Behaving Badly (which we gave as our wedding favors.) Next was our memoir, Please Don't Feed the Daisy, my favorite. Our latest book PURE CUTE just went into it's fifth printing. At times, I do miss dancing and being part of the theater but I can't imagine being anywhere else than where I am right now. Bev and I will be celebrating our five year wedding anniversary this Saturday, we've published eight great books so far, and we are living our version of the American dream in our upper west side brownstone with our four dogs, one cat, two turtles and a story book happy ending."

Thank you to Jason for so candidly sharing your story with us. We send our congratulations to Jason, Bev and the entire pet family! We cannot wait to see what book comes next. 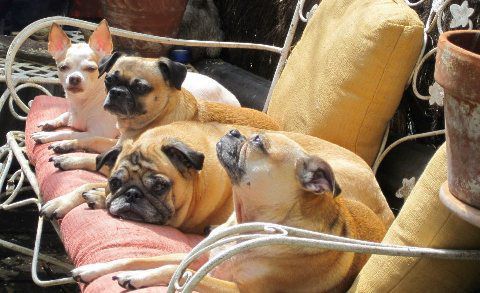