Emily Padgett Returns to Broadway in Re-Imagined 'Side Show' 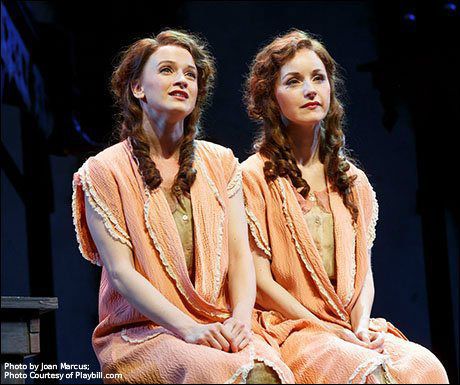 Read the full interview with Emily Padgett and Co-Star Erin Davie from the New York Times.

Though its initial Broadway run in 1997 lasted a mere 91 performances, Side Show has had a passionate following of devoted fans throughout the years. The original cast album, with Tony Award nominees Alice Ripley and Emily Skinner (AMDA NY professor), is a must-have for musical theatre enthusiasts. And for those theatres and colleges across the U.S. willing to veer from more family-friendly musical theatre fare, Side Show continues to be a favorite. (AMDA mounted its own successful production of Side Show at the Los Angeles campus in 2011.)

The latest incarnation—re-imagined to strengthen the story, characters and scenes—opened at the La Jolla Playhouse in late 2013 and recently completed a run at The Kennedy Center in Washington, D.C. Beginning October 28, Side Show will return to Broadway with AMDA alumna Emily Padgett and Erin Davie starring as the conjoined twins Violet and Daisy Hilton. Peter Marks recently wrote in the Washington Post: “Capped by two climactic, heartbreaking songs and two tender, epic performances, the Side Show that has been given a new life by the Kennedy Center is an intoxicating experience … .”

Side Show will mark Emily Padgett’s fourth Broadway show. Her previous credits include the Broadway productions of Rock of Ages, Grease and Legally Blonde, as well as the national tours of Flashdance The Musical, Grease and Cats. In addition to her many theatrical credits, she has appeared on television in “Louie,” “Shall We Dance On Ice?,” and as herself in the television series “Step It Up and Dance.”

Here at AMDA, we are eagerly awaiting the new Broadway recording of Side Show. According to the Washington Post, there are 10 new full and fragmentary songs in the new production. Adding it to the Christmas stocking wish list now!