Are we a nation of states? What’s the state of our nation?
I’m past patiently waitin’, I’m passionately
Smashin’ every expectation
Every action’s an act of creation
I’m laughin’ in the face of casualties and sorrow
For the first time, I’m thinkin’ past tomorrow! 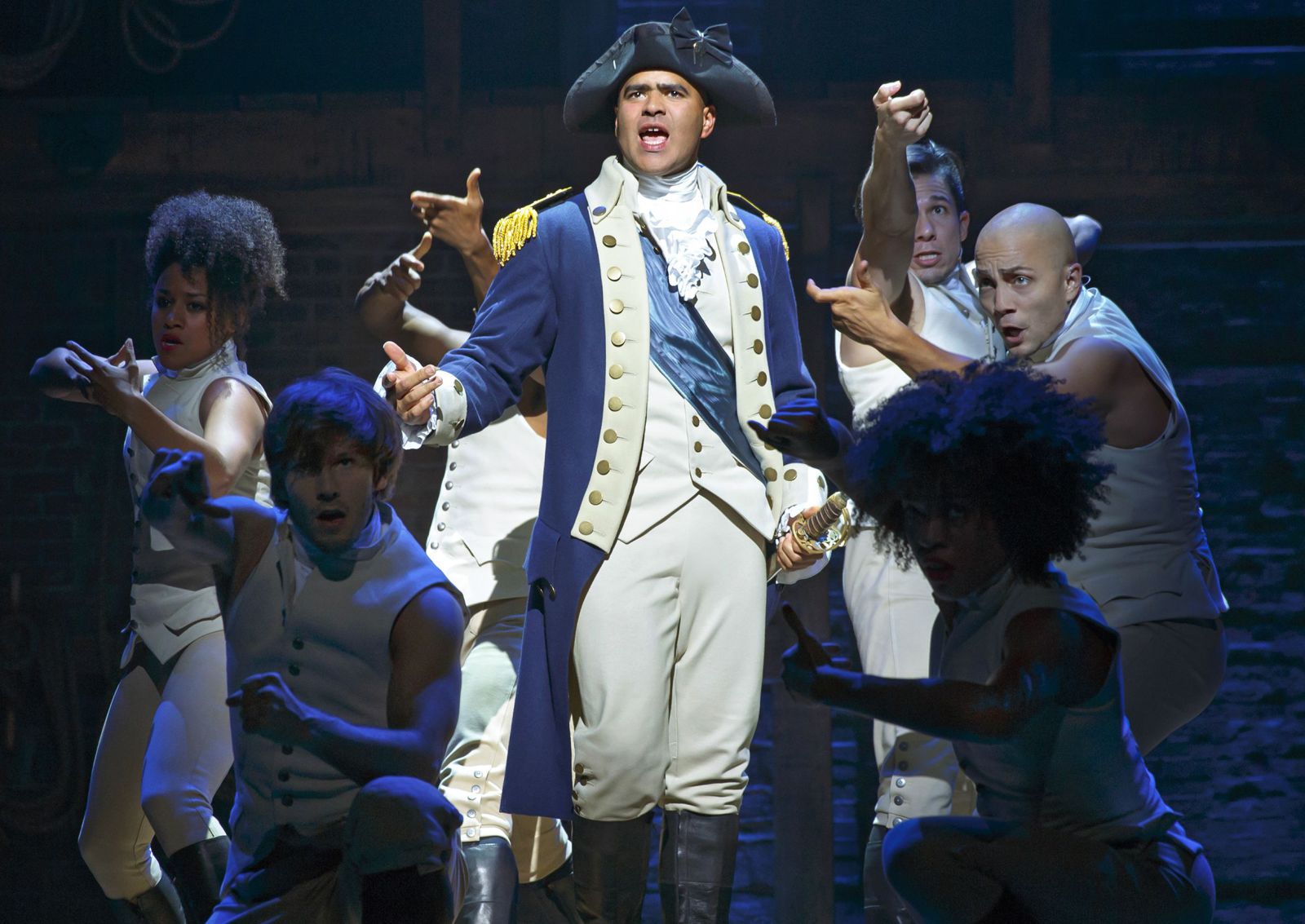 Confused? Let’s back up.

Wiping the dust off American history books, Lin-Manuel Miranda (In the Heights) created his new musical Hamilton, which transitioned from its sold-out Off-Broadway run to appear before Broadway audiences for the first time in August. With its hip-hop soundtrack and multiethnic cast, Hamilton challenges the canonical imagery of America’s founding fathers: Gone are the old men in powdered wigs, replaced with young revolutionaries mixing cabinet meetings with rap battles, historic speeches with modern slang.

With cast interviews and articles appearing in every major news outlet across the nation, critics have lauded Hamilton as the “most exciting and significant musical of the decade” (Wall Street Journal) and the “best Broadway musical in years” (Billboard). Tickets are nearly sold out a year in advance, with past audience members including such luminaries as President Barack Obama, the Supreme Court justices, Sara Bareilles, Madonna and Bill Clinton.

The production stars AMDA alumni Christopher Jackson (George Washington) and Anthony Ramos (John Laurens/Philip Hamilton), both of whom originated their roles in the world premiere at New York City’s Public Theater. While Hamilton marks Ramos’ Broadway debut, Emmy-winning composer Jackson is a Broadway veteran, with such titles under his belt as The Lion King (Simba), Memphis (Delray), and his award-winning originating performance for In the Heights (Benny).

When asked how it felt to perform for the president, Ramos responds: “I was just filled with electricity...You could feel the presence in the place. The atmosphere was just different. It was like nothing I’ve ever felt.”

After seeing Hamilton with the first family, President Obama commented on the musical’s poignant relevance to modern audiences: “[Hamilton] speaks to this vibrancy of American democracy, but also the fact that it was made by these living, breathing, flawed individuals who were brilliant. It doesn’t feel distant. And it doesn’t feel set apart from the argument that we’re having today.”

And that’s precisely the point. 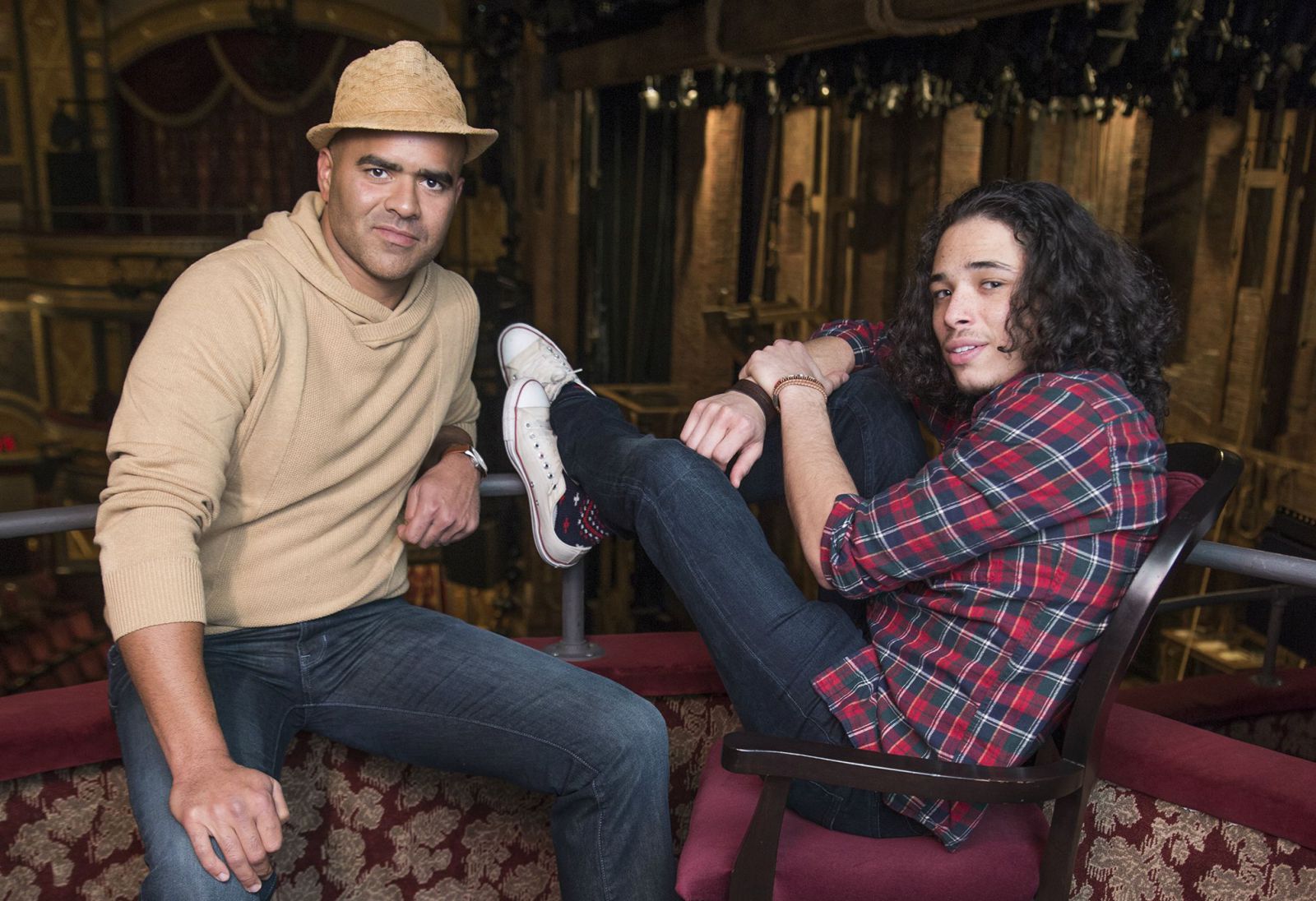 Hamilton is not here to redefine history or Broadway. Despite deviating from typical Broadway formula, hip-hop is hardly an unconventional genre, nor is Hamilton the first time rap has appeared before Broadway audiences. “Hip-hop’s just another form,” Jackson shrugged. “It’s one of the forms that Lin explores so, though it hasn’t been done in the Broadway canon as much, it certainly didn’t seem out of the ordinary.”

And therein lies the magic of Hamilton: not what “sticks out” to the audience but rather what doesn’t. As viewers are drawn deeper and deeper into the allure of Miranda’s charismatic soundtrack, it seems perfectly natural for ethnic actors to play white characters, for George Washington to spit rhymes as the fate of America hangs in the balance. It is the law of realism in any medium or genre: That which is treated as ordinary, becomes so. The result? A musical that gives cross-racial performance the attention it deserves—that is to say, none, allowing audiences to absorb new perspectives and genres without prejudice.

“There’s no color on that stage,” Ramos remarks. “You don’t even care about the fact that the cast is multiracial, ’cause everyone’s so good. When Washington walks out in the beginning, audiences think, ‘Oh, it’s an African-American dude wearing clothes that African-Americans didn’t wear back then.’ But once he opens his mouth, that’s it. You’re sucked in. It’s about the story—you don’t even care what anybody looks like, really.”

Jackson is no stranger to Miranda’s work: The two performed together in the improv hip-hop group Freestyle Love Supreme, and Miranda worked with Jackson in creating the role of Benny for In the Heights. “Lin certainly has been writing to my strengths for years,” Jackson says, adding that Miranda’s personal history with hip-hop and the inherent power of the genre led to Hamilton’s powerhouse soundtrack.

“Hip-hop is such an incredible tool to use to tell history, because you can cram so much information all at once in a condensed amount of time,” notes Ramos. 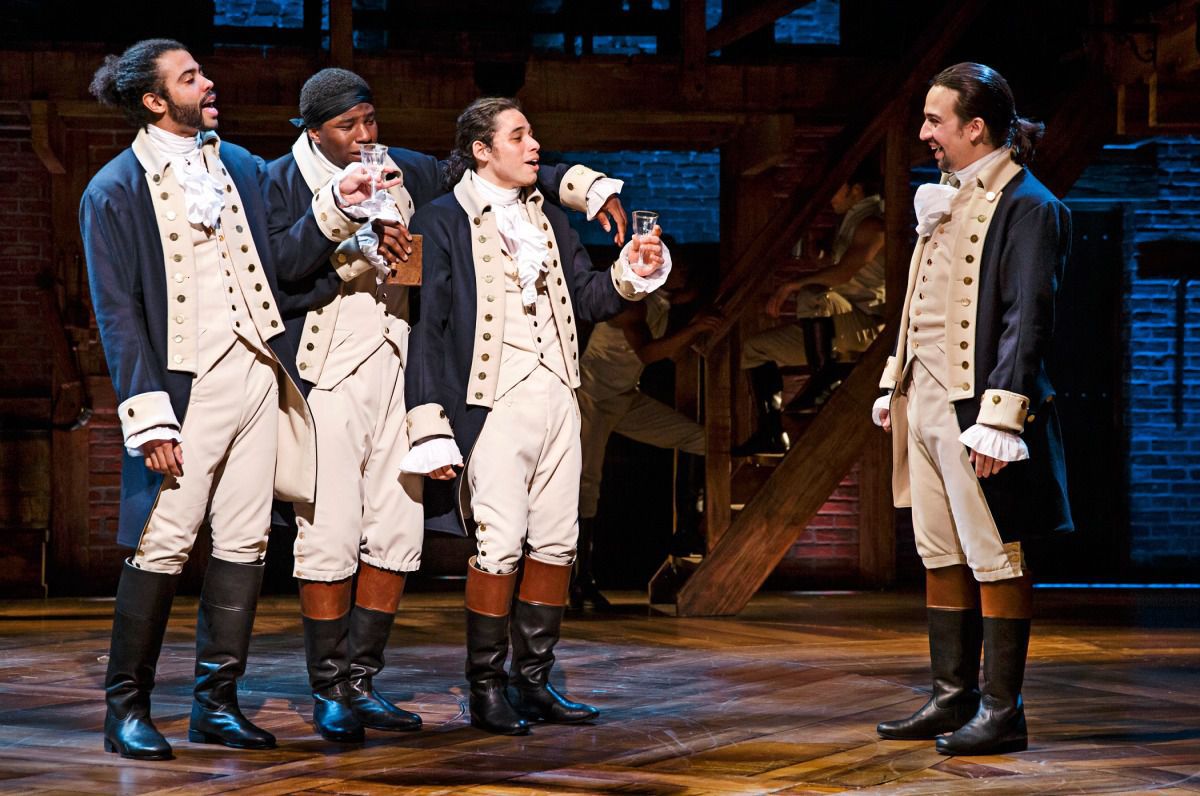 “I think that it’s a form that lends itself to storytelling, perhaps in a way that no other form of music does,” adds Jackson. “The very structure of it takes the elements of American song structure and turns it on its ear, much in the same way that you listen to John Coltrane’s recording of ‘My Favorite Things.’ By rapping, you give yourself more latitude for cultural reference, musical reference, inflection in a way that singing a straight melodic turn doesn’t always afford you. It gives you more freedom.”

Appropriate, then, that George Washington turns to rap when he has the greatest need for expression. “When Washington is at his most stressed points in Hamilton, he raps,” Jackson says. “The further along through the story and his lifetime as they arc through the show, the more he moves towards melodics and singing when the nation finds its way.”

As Jackson points out, the founding fathers were merely that: fathers and sons with fears, dreams and everyday concerns. The power of Hamilton lies in the disinterest of its own novelty, bringing a defining moment of American history back down to earth. Miranda’s characters remind audiences that the founding fathers—often idolized to the point of deification—were at the end of the day flawed mortal men.

“What’s the lesson versus the myth, how have we deified these people? A popular drawing after Washington’s death was him ascending to heaven carried by cherubs. That’s not real,” Jackson argues. “Washington was a great man: He was flawed, he was passionate, he wanted things, he made mistakes. He dealt with a tremendous amount of loss in his life. These are real people, but the further away we get from them walking this earth, the more we start trusting myth as fact.”

“They were all just ambitious young kids,” Ramos reminds us. “They all had dreams and aspirations, and they all made mistakes and were far from perfect, but with each other they made something extraordinary happen.”

The thought of America’s founding fathers as “young kids” may seem odd, but the point becomes all too poignant when Hamilton confesses early on in the show: “Only nineteen, but my mind is older/These New York City streets are getting colder”; and “I’d never thought I’d live past twenty/Where I come from, some get half as many.” 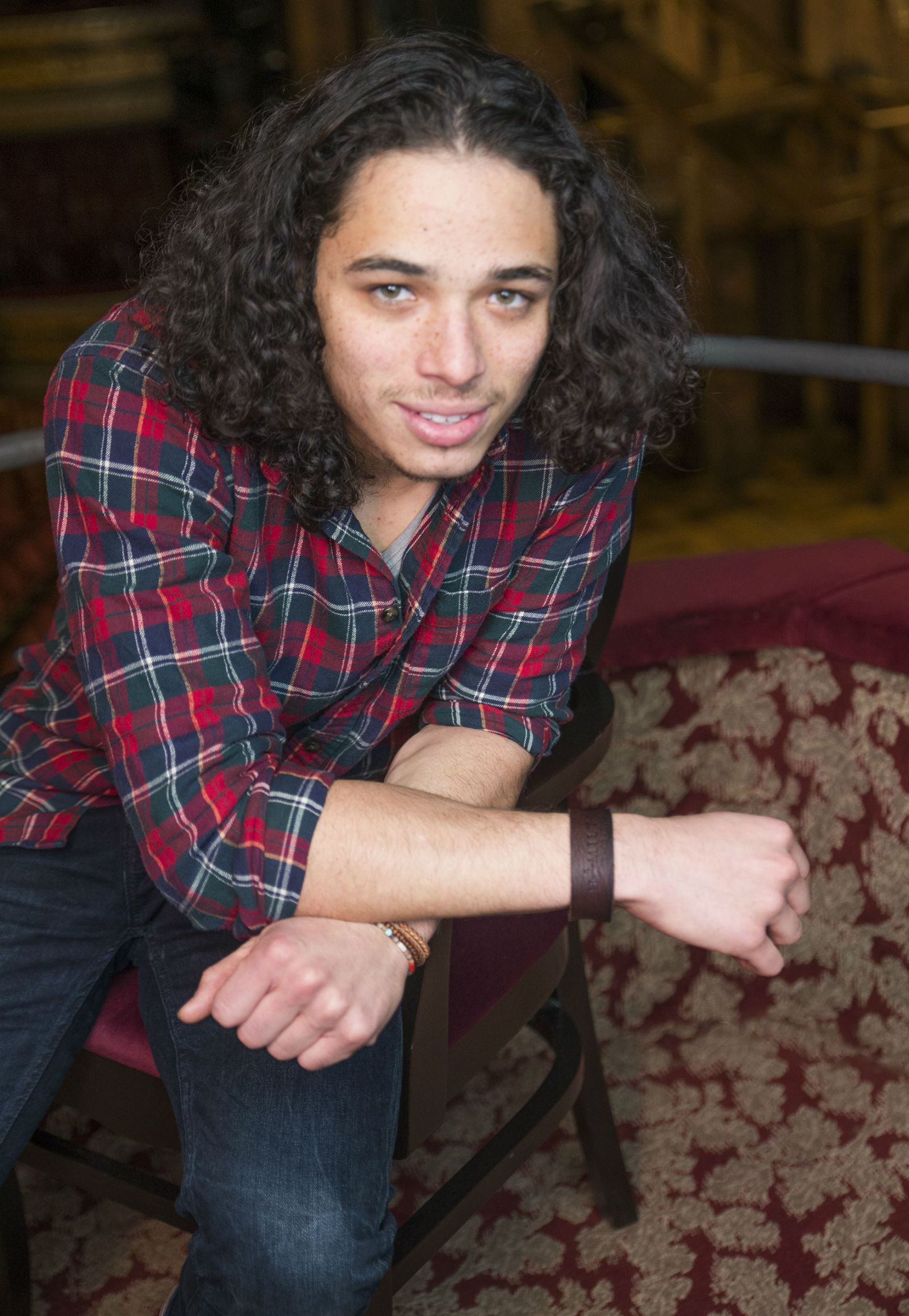 “I come from a neighborhood where some of my friends didn’t make it past high school, or they just made it past high school and got shot, or are in jail,” Ramos explains. “When [Hamilton] says, ‘Scratch that—this is not a moment, it’s a movement,’ that’s a proclamation I related to. We could just live for the moment, but I have faith that we don’t have to live for just this moment—we can live for this moment and the moments to come. I think a lot of kids in the hood don’t grow up believing that.”

In short, Hamilton is not here to reshape history—it’s here to reclaim it. “When you can step out of the classroom and see actual people living this out onstage, you get a glimpse into the lives of these people,” says Ramos. “Using people who look like our general public now and putting them on the stage, kids can come to this and think, ‘I can actually envision this now. This doesn’t look like something distant to me.’”

“It’s always been more about how much we tell, how much truth we speak when we say, ‘This is what happened,’ and you got it by 15 other accounts,” Jackson points out. “I don’t think we’re redefining history, I think we’re just telling it in a way that most people haven’t experienced. These events happened. These people lived.”

As Hamilton continues to dazzle audiences for the foreseeable future (and with the way things are going, that may be a long time indeed), patrons should remember that Hamilton’s electrifying soundtrack and stellar performance offer homogenization, not revolution. The lines between cultures and genres have blurred, and audiences in the 21st century are reminded that the melting pot of the American dream may not be as ossified an ideal as many would assume. Hamilton does not cater to one subculture, and it is that universal approach that makes the musical’s message strangely pertinent for both founding fathers and modern audiences:

“All these people came from all these places, yet they found a common ground and came together to make this one amazing, spectacular thing happen...which is now our country. You know what I’m saying? They existed,” Ramos says. “I think that’s the message: No dream is too small. Almost anything is possible.”