AMDA Alum Alex Rose Wiesel has successfully made her way from performing on stage in her hometown of San Diego to appearing on numerous commercials and on TV. You might already have seen her face in such shows as “Medium”, “Dexter”, “The Hard Times of RJ Berger” and “Far From The Tree”. And this fall Alex will appear in Disney's “So Random.” We took a moment to catch up with Alex and find out her own take on what it is like to be a working actor.

What was that one event that made you know you wanted to be a performer?

I think becoming a performer or artist is something inside of each of us who are destined to do it. For me my first show was in the 7th grade at a community theater, I was tree #2 in The Wizard of Oz. I LOVED it. I continued to perform in the theater and knew when I graduated I wanted to study something related. At first I thought I would study Broadcasting and I applied to a number of universities, then found out about AMDA, I auditioned, and was accepted. I'm so happy this is how it worked out.

Why did you choose AMDA?

First off I knew I wanted to stay in California however I always thought I needed a 'back up' degree, hence applying to universities to study Broadcast Journalism. But the truth is, performing is what I really wanted to do and there was no reason not to jump in with both feet. I'm glad I did. Once I found out about AMDA and attended the open house it was unlike any of the schools I toured. It was a full immersion in my area of study where other schools seemed a bit more general. Not only that, but after looking at the class schedule, there wasn't one class that I didn't want to go to. I didn't see that anywhere else.

What did you learn from AMDA that has helped you in your career?

The biggest thing I learned at AMDA was how to be a professional. It's one thing to have talent but I've found it's just as important to be someone people want to work with. The biggest compliment is having someone ask you back to work with them again and again. And some of the coolest things I've done came from those relationships. Well that, and the busy schedule. I thought I was busy while at AMDA with school and rehearsal. I had no idea! Time management was something very helpful that I learned at AMDA as well.

You have been quite successful getting work in TV and film. What can you tell us about the process of breaking into that world, getting an agent and auditioning?

The best thing I learned about breaking into the business is that it is different for everybody. Nobody in the business has the same story and no one path leads to success. Instead take something from everyone you meet, a little tip here or trick there, whatever sticks for you. I think comparing yourself to anyone else is actor suicide. There's no one magic agent or way to audition that guarantees success. The best way to be successful is to focus on you, truly 100%. Focus on being you, discovering you and really bring that into every meeting and audition you have. Because really being yourself is the one thing that sets you apart from anyone else coming in that room. It's the one thing you can do that will make them remember and want to work with you. The thing I always tell myself (which my coach told me) is "walk into every room as if you already have the career you've always dreamed of". This always helps me be my most confident self. I am still working on this.

What has been your favorite experience thus far?

That is difficult to answer because I feel so fortunate to be able to do what I have and for what is still to come. I really enjoy working on all the fantasy and action stuff but I think my favorite experience thus far wasn't necessarily the biggest thing I've done but it was the first time I really felt like an “actress." Over a year ago I worked on a Webseries which began to air but then got pulled for network development. It was my first major role in a series and we had over 14 days of filming to start. I had done a majority of theater before this point and hadn't experienced the lifestyle of being on the set everyday with the same cast and crew. It was so fantastic, the first time I really got to live in this world for an extended period of time and I knew I had fallen in love with it. I still speak to a majority of the cast and crew today, use a bunch of the footage on my reel and am so thankful for that inaugural experience.

What is the "one" thing that will make you feel like you have made it?

Something I'm really looking forward to in the future is getting to travel to shoot something, preferably overseas. It's something I haven't done yet that I've always wanted to. I also have a great performing day job I do when I'm not auditioning or shooting. When my acting career gets so busy that I can no longer keep that day job, even though I'll miss it, I think then I'll really feel like I've made it.

When the auditioning process gets tough, what keeps you going?

Auditioning, and more often then not, not getting those parts can be really trying. Aside from developing thicker skin, I'm a pretty take-it-to-heart kind of person so that was a little tough for me. Really believing that this is what you HAVE to be doing is so important. Even when it gets slow that love for what you're doing and feeling that this is what you're meant to do is what keeps me going. Even when it is really tough I never regret choosing this path. As cliché as it sounds, it is an unconditional love that makes me get up every morning and drive to every corner of town sometimes to just look into a camera and smile. It's a total rollercoaster but the highs make it so very worth it!

Tell us about “So Random”.

“So Random” was so much fun! I actually started as a stand-in on the show. In a nutshell, it is a semi-musical sketch show. After the first episode I was contracted for the second episode. They were short two dancers and I knew the steps so I was put in. It was so rewarding for me to have it work out like that. After that I was cast in a variety of different sketches and several more dance numbers. It was a great experience to see how a show like that works, from table reads to shooting, in front of a live audience. I definitely hope to work with Disney TV more in the future. 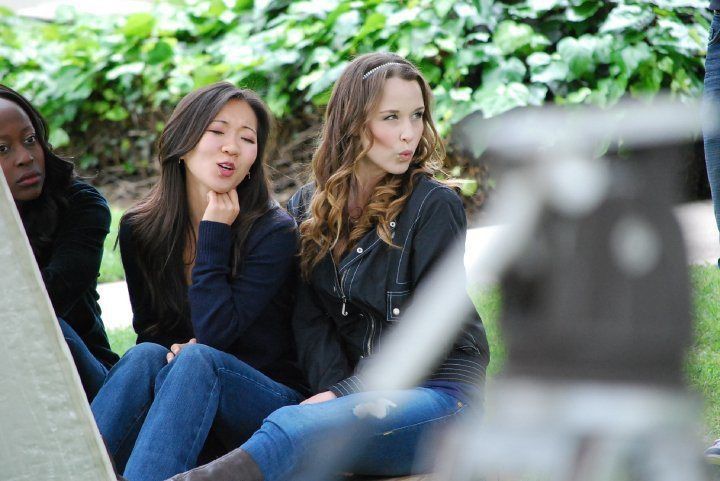