Alumni Jennifer Garza Finds Her Voice and Yours!

Jennifer Garza graduated from the AMDA NYC Integrated program in Spring 2008. Upon graduation, Jennifer realized her passion was in voice and speech work. She traveled to London to continue her studies at the Central School of Speech and Drama at the University of London, while also teaching Shakespeare, phonetics, accents and voice and speech at several local colleges. After receiving her MFA, Jennifer has returned to NYC and is now teaching and consulting privately with actors who want further VPS training, accent/dialect work, or monologue coaching. She specializes in Shakespearean speech. AMDA students might recognize her from some of their warm-ups in Joe Goscinski’s VPS classes. We spoke with Jennifer to find out more about how she came to her path in VPS education.

When did you decide to go to AMDA?

After my first play at the end of high school, I knew my calling was to be in the theatre! I went to AMDA to hone my skills in singing and dancing, and planned to do further studies in Shakespeare and Classical performance upon graduation.

After you graduated what were your goals?

I fell in love with the voice aspect of the work during my time at AMDA, and after graduation decided to apply to a graduate program (without having my undergrad degree!) to gain a better knowledge of voice and speech. I decided to take my career in the direction of education, instead of focusing primarily on performance.

What was it that inspired you to go in this direction rather than performance?

While at AMDA I discovered that I excelled in Voice Production and Speech classes more than I did in any others. Coming from a background as a high school journalist, I was a phonetics nerd and spent a lot of my free time working on my VPS. The summer after my graduation I did summer stock Shakespeare where I was the resident "Accent Specialist" and realized that I really love teaching.

When I returned home to NYC, Joe Goscinski offered me a job teaching warm-ups at AMDA, and I loved seeing how much my warm-ups got everyone fired up for the day! It was great to see their progress from the beginning of the warm-up to the end, to really see their bodies becoming more agile and prepared for the day's work.

When I decided that this was my direction, I researched pedagogy programs for voice and speech, and discovered that the most renowned programs were in London. I applied to the Central School of Speech and Drama at the University of London - which was the birthplace of modern VPS practice. All the greats have gone through or taught on that program. They granted me an interview/audition based on special circumstances (even though I didn't have a BFA, they liked the fact that I was already working at AMDA), and told me the day of my audition that I was going to be accepted.

What have you learned about yourself?

I have learned that above all, my passion lies in education.

Tell us about what you are doing since you have graduated and moved back to NYC?

Since I have been back I have mostly been working privately. I still teach warm-ups at AMDA every so often, and it's always a great part of my week. Around the city I mostly specialize in teaching accents, phonetics and coaching Shakespearean monologues, as this is what I taught at a few universities in London during my studies.

What is it like to come back to your alma mater in now as a teacher instead of a student?

It's always great walking down the halls where just a few years ago I was prancing around in tap shoes and dance shorts, with wide eyes and big dreams of singing and dancing on Broadway. I see the students and think about how much has changed in the last four years. And while I don't have the same dreams as they do anymore, I can really appreciate what they're trying to accomplish in school, where their minds are, and it helps me to be able to relate to them better as an instructor.

What is your ultimate career goal?

I don't think I have an "ultimate career goal" anymore. I am going where the wind takes me. At some point I would love to be confident enough in speaking French to go and live in Paris for a while, to possibly work and prepare students who want to work in the U.S. by training them in standard American speech. And while teaching is my passion, I would love to eventually get back into performance. Shakespeare was my first love after all.

After your own journey, what have you learned that you would like to share with current students and recent alumni?

I've learned that setting concrete goals too far in advance is never a good idea. We work in a profession that changes with every season, and we have to be prepared for change at any moment. I would tell recent alumni not to be discouraged at the lack of professional work that may arise. We are where we are in life at any given moment for a reason. I went to AMDA to study musical theatre and found out that I'm actually a VPS teacher! You never know what life adventures are coming up, so roll with the punches and don't be afraid to pursue the things that are going to make you most successful. Even if what will make you most successful isn't exactly what you'd planned on doing. Also, I have learned that peanut butter and bananas work as food props for about 85% of the scenes you'll ever do.

Thank you Jennifer. We will look forward to hearing about where the wind continues to take you! 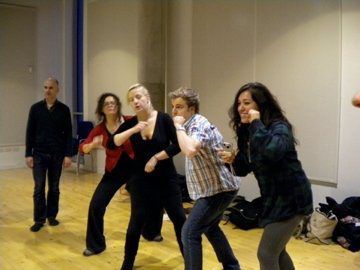