Alumnus Donovan Jones Finds His Balance with Rebecca Peache on "America's Got Talent"!

AMDA alumnus Donovan Jones and his wife Rebecca Peache recently performed on America's Got Talent" where they made it to the semi-finals with their breathtaking acrobatic and aerial routines.

We caught up with Donovan to talk to him about how he and Rebecca got their start, what it was like to perform on the show, and what they plan to do next.

Congratulations on your recent success in making it all the way to the semi-finals on the current season of "America's Got Talent"! Tell us about what the experience was like for you and Rebecca.

It was really awe inspiring to be part of such a big production. It's the biggest talent show on earth, and performing for an audience of 3 thousand while also knowing it was being broadcast live to over 17 million was quite something.

You also competed on "Britains Got Talent" in the U.K. How were the experiences different?

The UK version was a lot of fun. It was the first season of the show and the whole experience lasted just under a week when the show went live. In the US we started the process in April and finished last week, after just over 5 months. Also, the acts were completely different. In Britain it seemed like we were competing almost exclusively against kids and novelty acts. In America, we seemed to have a lot more "extreme" acts.

What you and Rebecca do is very unique and requires incredible skill, combining aerial choreography, acrobatics and balancing. How do you describe it?

We base what we do on our collective sports, dance and performance experience, and we call it "an acrobalance and aerial musical act". Rebecca and I both come from a musical theatre background, she as a dancer and I as a singer, and we really started our act from there.

How long have you been doing this and how did you start?

"Britain's Got Talent" was really the launch of our first acrobatic act. Rebecca had the idea that instead of performing alongside each other in other people's productions, we should try to teach ourselves partnering and start our own act. So, we took a few months and really started to focus our attention on what we'd seen other acrobats do that had inspired us. We watched Cirque du Soleil DVDs and started from there really.

You certainly won over the "America's Got Talent" judges with your performances and made a great deal of fans. What is next for you?

Since "Britain's Got Talent" opened so many doors for us in Europe we were hoping "America's Got Talent" would do the same for us in the US. Thankfully, so far it seems to have worked, and we are getting some very nice offers at the moment including new TV opportunities both here and abroad. As a matter of fact, we are flying to Istanbul for a big TV show there, and we will be back in the US in a week or so for a performance and interview on a nationally syndicated TV show in Hollywood, CA.

Now let's go back a little bit and talk about AMDA. How did you make the decision to study at AMDA?

I grew up in Europe, and moved to the states when I was 13 getting almost immediately involved in musical theatre. As I graduated high school I wanted to really study acting and musical theatre full time but did not want a 4 year program. I wanted to be in NY, and AMDA seemed like the perfect solution.

Did you always know you wanted to perform or what inspired you?

I suppose I didn't know until I saw other children my age performing, and realised how much fun it could be. My father was an entertainer so I had grown up in the wings of some of the biggest cabarets in Paris. It didn't connect however until we moved to the US and I joined the local children's theatre.

What is the most important thing you learned at AMDA?

I think one of the most valuable things I learned was that acting wasn't simply a matter of monologues and scene study. One of the things that makes our performance so personal now is that we really enjoy the story of the movement during the progression of the act. That is something most acrobats find difficult to convey but it's exactly what appealed to us when we decided to teach ourselves acrobatics. I would definitely attribute that to my time at AMDA. The focus on the importance of the physicality of acting was invaluable in making high level acrobatics look more like a dramatic story rather than simply a well executed trick.

What advice do you have for graduating students?

Good acting, and stage performance training translates into almost every aspect of entertainment so don't be afraid to think outside the box.

Thank you for sharing your story with us and your amazing photos. Look for Donovan and Rebecca to appear on the TV show "Doctors", as part of a fantasy bodies episode, later this month. 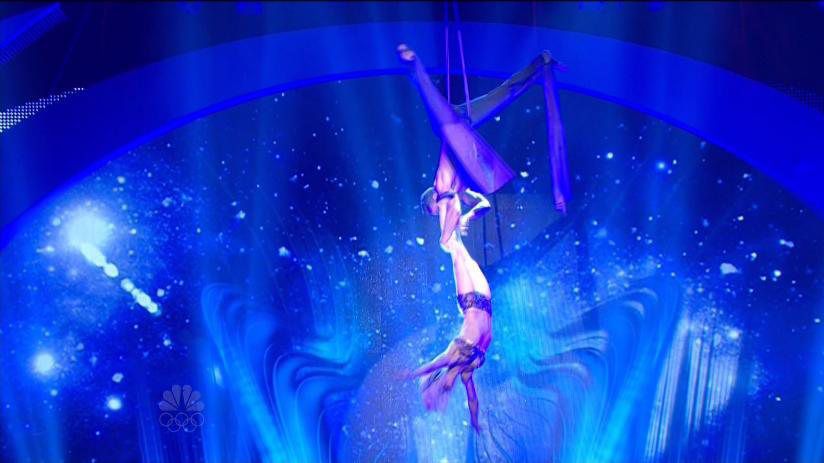 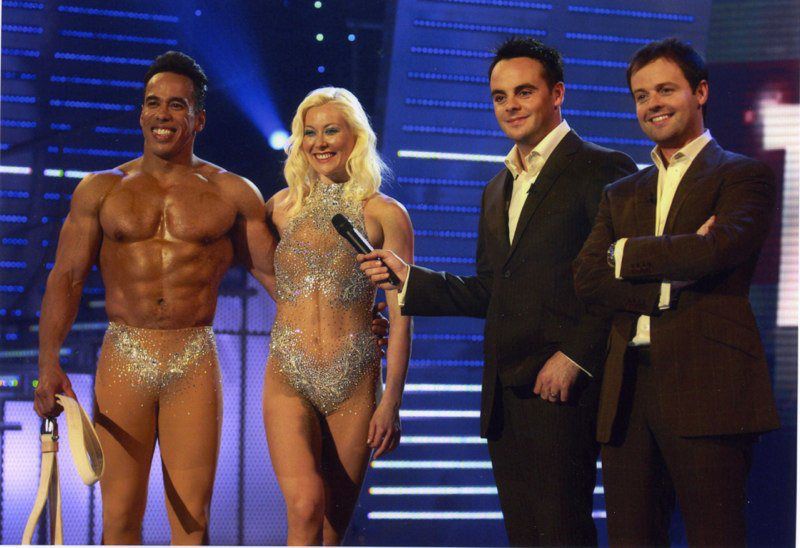 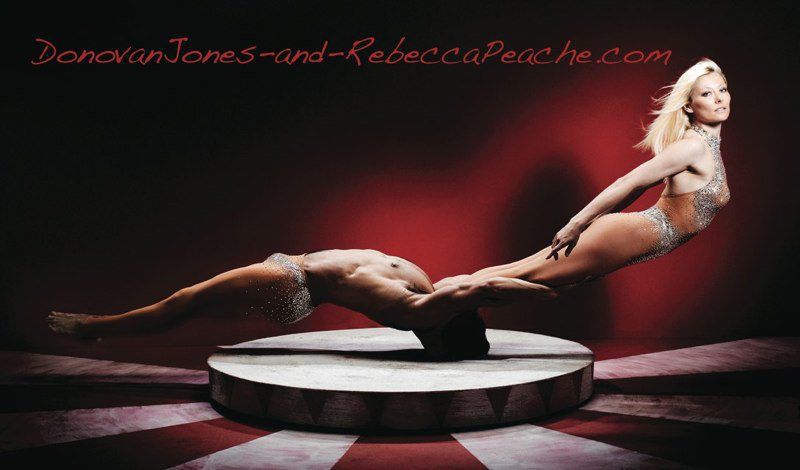 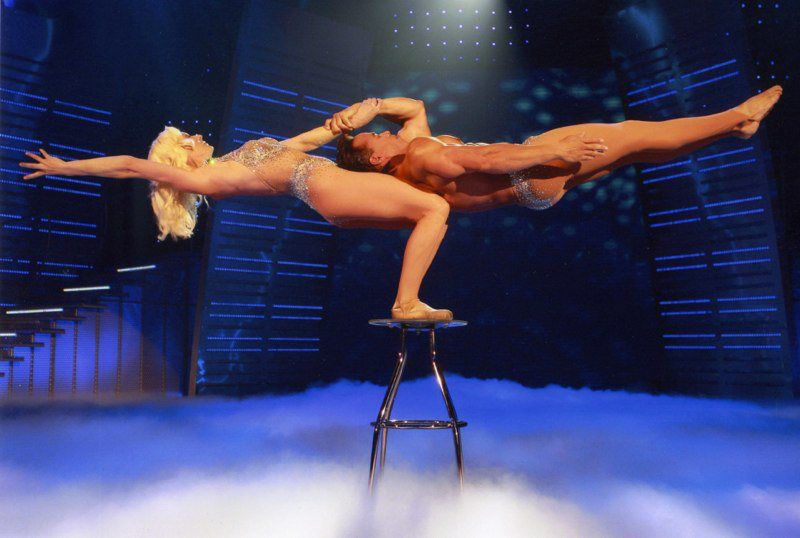 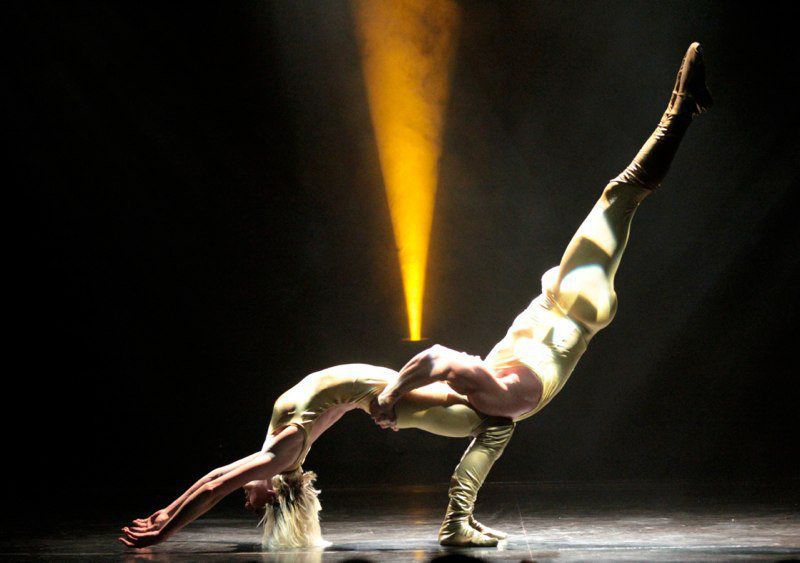