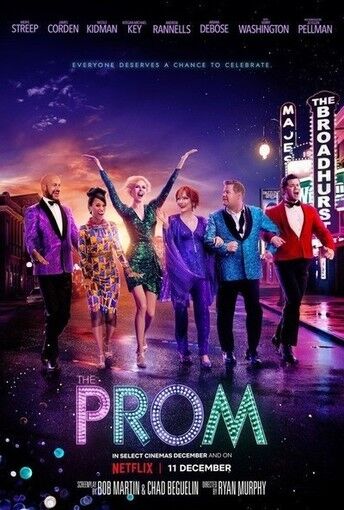 Makes her big screen debut in The Prom, now on Netflix. Vasthy is the only Original Broadway Cast Member in the film, and served as choreographer for the number "Dance with You." The film also features AMDA Alumni Nicole Rush,  Ramone Garcia, and Luis LT Martinez.

Stars in Pretty Little Dead Girl airing December 12 at 8 PM EST. Ben recently starred in the horror short film O.I., following a man who has a truly original idea that he is unable to share with anyone else without deadly consequences.

Appears as a guest commentator on 20/20’s upcoming special "The Year: 2020," airing on ABC on December 29 at 9 PM EST. Amanda will join CBS’ The Talk as a full time co-host starting in January.

Executive produces and hosts OUTstanding, a new limited series focusing on LGBTQ individuals making major contributions to their communities. Episodes are available on Localish.com, ABC’s TV apps, and @jessetyler on Instagram and Twitter. Jesse joined virtually with 32 other stars to read a portion of The Inheritance for a video in honor of World AIDS Day.

Will star as “Hasty” in an upcoming episode of Nickelodeon’s Side Hustle titled “Karaoke Kickoff.” Kevin will also perform in the radio play Wally World, streaming on December 16 as part of the Steppenwolf NOW’s virtual stage programming.

Will star as “Usnavi” in the highly anticipated film adaptation of In the Heights, which will now hit movie theatres and HBO Max on June 18. Anthony will also be a recurring character in season 4 of HBO’s In Treatment.

Desiree and her husband Nicholas Davar are putting on the fifth installment of their virtual concert series Superheroes in Love Holiday Special on December 19 at 7:30 PM EST. Tickets start at $10 and the show will be streamable for one week after the broadcast. Desiree and Leslie McDonel ’00 were featured in Transcendence Theatre Company’s Annual Gala Celebration in September. LINK to Superheroes in Love Holiday Special

Is a soprano in the Los Angeles based Angel City Chorale, performing in the virtual concert It’s Not the Holidays ‘til the Angels Sing tomorrow, December 12 at 6 PM PST. Free tickets are available here.
Mary Ann Penzero ’86:

Co-produces and narrates The Nutracker: Virtual Variations presented by The Paige Fraser Foundation. An $8 donation gives you access to the stream, which is available starting December 14.
Mauricio Martinez ’99:

Stars in Rise Up: A Tectonic Cabaret, streaming for free on Tectonic Theater’s YouTube page through December 12. Mauricio, Jacob Smith ’09 and Sarah Stiles ’00 star in the new soap opera-inspired podcast ‘As The Curtain Rises.’

Is a guest on season 2 of Will Smith's Will from Home series on Snapchat, launching December 14 with episodes airing daily. Jason topped the charts as #1 Top Celeb and #1 Top Song for his single “Savage Love (Laxed – Siren Beat)” with Jawsh 685 on The Year on TikTok: Top 100.

Stars in the Vanities Reunion Event, streaming live on Theatre Raleigh’s YouTube page on December 12 at 7:30 PM EST. Vanities premiered Off-Broadway in 2009, and this reunion event features Sarah and other members of the original cast and crew performing, reminiscing, and sharing what they are up to now. Sarah recently reunited with fellow Broadway cast members of Tootsie on the November 12 episode of Quarantine, Cabaret, and Cocktails.

Plays “Archduke of Plastoria/Porkpoleon/Various Voices” in The World to Come podcast. Scott is a NYC-based actor, voice-performer, theatrical director and designer. He is also a concept, caricature and graphic artist.

Stars in the new podcast 'Twas the Night a modern homage to Clement Clarke Moore's famous poem "A Visit from St. Nicholas." The one-episode radio play will be released for free on all podcast apps by The Hamilcast on December 14, and will raise money for The Actors Fund. Christopher will make a guest appearance on Let’s Make a Deal on December 21.

Performed live on the Filipino American Cancer Care Facebook page for the FACC Virtual Christmas Caroling Fundraising Event benefitting cancer patients in the Philippines and United States on December 3. Excelsa is a philanthropist, performer, and model. She was crowned Miss Republic of the Philippines International from 2018 - 2020.

Will perform in “Under a Spell: A Magical Disney Concert” on January 9 at the Nerima Culture Center in Tokyo. Yuka is a recent graduate from AMDA NY’s Integrated Conservatory.

Will perform in A Christmas Wish, a virtual concert benefitting theatrical charity Acting For Others who provide emotional and financial support to theatre workers in times of need. The concert will stream at select times from December 17 – 20. Kyle will star alongside Chris Sieber ’89, Mamie Parris ’97, and Mauricio Martinez ’99 in Paper Mill Playhouse’s Sing in a New Year! available from December 19 through January 1.

Joins Theater Resources Unlimited as a guest speaker at 'Art and Activism: How Theater Can Open (and Change) Minds’ on December 22 at 6 PM EST. Dominique is the director of National Action Network.

Won the WOWIE Award for Best Political/News Instagram account. Brita and Peppermint ’99 were featured in the variety show Divas for Democracy: United We Slay, which raised voter awareness of issues affecting the LGBTQIA+ community during the 2020 election and benefitted Drag Out the Vote. Brita is Drag Out the Vote’s National co-chair.

Was selected to be a mentee at the 2020 Diverse Women in Media Forum Mentorship Program that took place December 3 - 4. The program matched each recipient with a professional mentor who guides them with tools, connections and insights for future endeavors as a media professional. Ariana performed as “Juana” in Enter Stage Right at the 24th St. Theatre in Los Angeles last year.

Will teach an intermediate/advanced jazz masterclass for children on December 12 at The Red Shoes Dance Academy based in Lynchburg, VA. Hattiebelle is a recent graduate of AMDA NY.