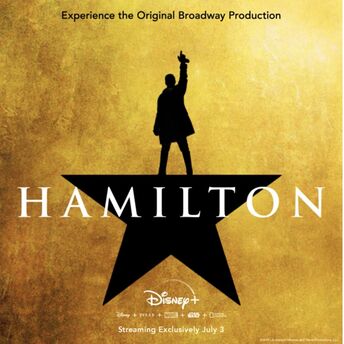 The filmed stage version of Broadway's Hamilton, starring Christopher Jackson ’94 and Anthony Ramos ’11, will now be released July 3, 2020 on Disney+.

Appears in Hammer, released in Canada last year, and available on VOD on July 5. Ben appeared in Limetown with Jessica Biel on Facebook Watch. Ben can also be seen in recurring roles on The Man in High Castle, The Bletchley Circle: San Francisco, and The Arrangement.

Wrote, executive produced and starred in the short film, The Book of Ruth. The Book of Ruth is starting the festival circuit and the world premiere will take place on June 11 at deadCenter Film Festival online. From there, they head to the Julien Dubuque International Film Fest, another MovieMaker Magazine top festival, and later this summer to BZN International Film Festival.

Is featured in the 2015 Bombshell Concert which will be streamed as a benefit for The Actors Fund on May 20 at 8 PM EST. Alexa made her Broadway debut in West Side Story, and will resume performances alongside Emilio Ramos ’13 and Armando Eleazar’14 this fall.

Performed a new monologue for a special edition of The 24 Hour Plays: Viral Monologues, “Covid & Incarceration” centered on real stories of people who are currently or have previously been incarcerated and their advocates during the pandemic. The monologues are available on IGTV @24hourplays and at https://24hourplays.com/viral-monologues/. Madeline also recently performed in a virtual reading of Hamlet on April 24 for Acting for a Cause.

Starred in a live stream of Jean-Paul Sartre’s No Exit on May 10 with Berlin-based group the Laboratorium group. Julia performed in “They Just Keep Moving the Line!” in the Be Our Guest Cabaret Series Off-Broadway in 2014.

Will play “Peto” and “Messenger” in The Age of Hollow Kings’ Crown: Shakespeare’s Complete History Cycle with Circle in the Sand, International Actors Ensemble, and Alex Theatre (Melbourne). The plays will be streamed live on Facebook Live and YouTube every Monday at 7 PM Australian Eastern Standard Time. Natalie is a founding member of the International Actors Ensemble and performed as “Antipholus of Syracuse” in their Mexican tour of Comedy of Errors and at festival appearances in Auckland and Melbourne.

Nominated for a 2020 Drama Desk Award for Outstanding Featured Actress in a Play for The Brief Wondrous Life of Oscar Wao. The Drama Desk Awards will be presented on NY1’s On Stage on May 31 at 7:30 PM EST. The ceremony will also stream on NY1.com and DramaDeskAwards.com.

Was featured on the cover of BACKSTAGE, where he discussed his career and new starring role in Ryan Murphy’s Hollywood, now streaming on Netflix. Earlier this month, Jeremy was featured on the virtual broadcast of The 2020 Lucille Lortel Awards.

Has been selected to participate in The Playwrights Project, an artistic initiative launched by Florida Studio Theatre (FST) employing 32 of the country’s top playwrights, sketch comedy writers, and musical theatre developers. Material generated by the participating playwrights will be considered for future production in FST’s Mainstage, Cabaret, Sketch Comedy, and Children’s Theatre programs. Julia is a writer, director, and performer currently residing in Chicago, where she writes and performs with The Second City Touring Company. Julia promotes diversity and equality through her performances and writing.