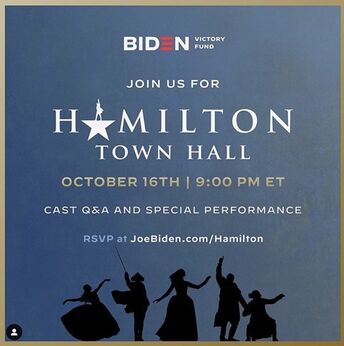 Christopher Jackson ’94 will reunite with members of the original cast of Hamilton for a virtual fundraiser supporting the Biden Victory Fund, TONIGHT, October 16 at 9PM ET. The Hamilton Town Hall will feature a Q & A, followed by a special performance.

Stars in the horror short film O.I. (learn more here), following a man who has a truly original idea that he is unable to share with anyone else without deadly consequences. Ben played “Adam” in Hammer, which was released in Canada last year and became available on VOD last summer. Ben also appeared in Limetown with Jessica Biel on Facebook Watch.

Co-directed, co-wrote, and performs in her antiracism short film, "High Score," making its world premiere at the Chelsea Film Festival from now through October 18. After the credits, viewers can rate the film 5 stars to vote for it to win the Audience Choice Award. “High Score” is also an official selection of the Oscar Qualifying HollyShorts Film Festival, streaming from November 9 - 15 on BitPix. Serena’s previous short CASHED is on Amazon Prime, featuring AMDA alumni Jaz Goodreau (Maret) ‘11 and Jerii Aquino ’11. (learn more here)

Will reprise her role as “Shannon” on CBS’ The Unicorn (learn more here), set to be a recurring character in the upcoming second season. Natalie’s guest starred in the first season’s finale, reuniting with former Justified co-star Walton Goggins.

Will perform in Broadway’s annual Hocus Pocus spoof and concert event, I Put a Spell on You. The event will move online this year, streaming for free on October 29 at 8PM EST. Donations are encouraged and benefit Broadway Cares/Equity Fights AIDS.

Perform in Tyler Tafolla ’17’s concept album “Seasons,” alongside previously reported Adante Carter ’14 and Michael Restaino ’15. The album is now available on all music platforms and proceeds will be donated to "Broadway Cares: Equity Fights AIDS" and "Feeding America." Check out their social media:

Collaborated with Jawsh 685 and BTS for a new edition of “Savage Love (Laxed – Siren Beat),” which climbed to Number 1 on the Billboard Hot 100 chart! Jason will appear as a guest on The Ellen Show TODAY, October 16.

Just released a new track “Never Have I Ever” as one-half of singer-songwriter duo, Brecnmari. Brecnmari have released a variety of new tracks during quarantine, and their work can be found on their Spotfiy channel.

Released the official music video for “We Need You.” (learn more here) The song is aimed at women but wants to get more people engaged in the presidential election, no matter their gender. Their song was featured on CBS 2 News at 5 New York (learn more here) last week.

Performed in Times Square with other Broadway community members in NYCNext’s first “A Moment for Broadway” event. These are a series of spontaneous performances throughout the city, not advertised beforehand to ensure social distancing. Chris Sieber ’89 was also in attendance.

Was featured in a SHAPE (learn more here) about how his daily Instagram workouts on @isaacboots have raised almost $1 million for No Kid Hungry. Isaac was recently featured on TODAY (learn more here) teaching a 28 minute Torch’d workout.

Is in the top 30, competing for BroadwayWorld’s Next on Stage College Edition. Watch her perform a “First Time In Forever”/”Beyond my Wildest Dreams” mashup and vote for her here (learn more here)!

Joined a virtual event (learn more here) hosted by VoteRiders, writing letters to voters in key states to educate them on voter ID laws and deadlines ahead of the 2020 presidential election. Krystal stars in One Royal Holiday, premiering on Hallmark on November 1 at 8PM EST.