What a celebration we are having on Sunday, October 10, 2021 with our first IN-PERSON graduation since February 2020! We cannot wait to celebrate our LA Summer 2021 AMDA Graduates, and help recognize their inspiring work and accomplishments.

We are excited to announce AMDA alumna Vasthy Mompoint as our speaker for this monumental occasion! 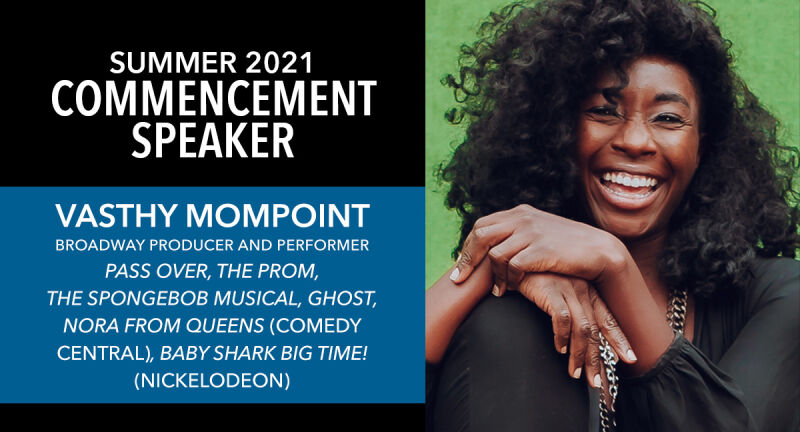 AMDA alumna Vasthy Mompoint is a multifaceted, versatile performer and producer whose dynamic personality and incredible talent have contributed to a career spanning over 20 years to date. Vasthy has appeared in eight Broadway shows, and is a two-time winner of the Legacy Robe, which recognizes a company member from each Broadway musical as having the most ensemble credits in that cast. She made her Broadway debut in Good Vibrations before playing various roles in Hot Feet, Mary Poppins, Ghost, Soul Doctor, Rocky, The SpongeBob Musical, and The Prom. Vasthy and the rest of the cast of SpongeBob Musical were invited to reprise their Broadway roles for a live performance on Nickelodeon.

Vasthy made her Broadway producing debut this past summer as a co-producer of Antoinette Chinonye Nwandu's Pass Over, the first Broadway play to re-open following an unprecedented 18-month hiatus. Vasthy’s original concert Bits, Gummies, Folk, and Love (or how I survived the last year of my life) returned to Feinstein’s/54 Below in July following sold out performances in 2019 and 2020.

Vasthy appeared in the Netflix film The Prom, based on the Broadway musical, and in Awkwafina’s Comedy Central television series, “Nora from Queens.” She will appear in the second season of Nickelodeon’s “Baby Shark’s Big Show!” as the recurring character Briny the Whale.

Vasthy currently resides in Los Angeles, where she was selected from thousands of applicants to participate in the “2020 CBS Diversity Sketch Comedy Showcase,” a hybrid comedy show featuring original writing and Broadway-style performances. She is also the recipient of a scholarship with "Saturday Night Live," in association with the Upright Citizens Brigade.

As an entrepreneur, Vasthy co-founded Broadway Babysitters, a childcare agency in New York City run and staffed exclusively by artists. Her experience in childcare and entertainment led Vasthy to develop, "Vasthy’s Friends," a video platform for Broadway performers to write, choreograph and compose original, child-friendly programming.

Vasthy is thankful for her education and continued support from AMDA, and is honored to speak at the October 2021 commencement ceremony.