Dear AMDA Community,
We have very sad news to share with you. We have just learned that our dear, beloved Spencer Beglarian died at his home yesterday, Wednesday, April 19th. He was in no pain and was surrounded by his family.

He loved each of you dearly. Please know that his AMDA students and the AMDA community held an incredibly special and unique place in his heart. Each of you who had the privilege of working with Spencer are blessed by his extraordinary mind, heart and loving spirit.

Spencer’s lung cancer came on so very fast and stunned us all with its speed.

We will be announcing a memorial service for the AMDA community very soon. We will create together a tribute to Spencer and to his spirit that will celebrate his life and vision and we will be sure that each of you who would like to contribute will have that opportunity.

We are all in shock over this unexpected and profound loss.

Spencer’s love and generosity of spirit will always be with us. 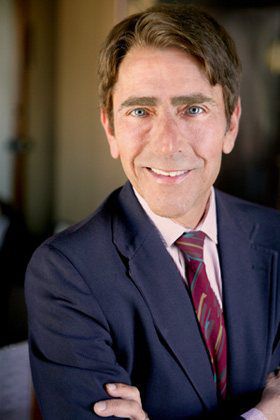 Spencer Beglarian’s contribution to AMDA LA and to the AMDA community was profound and on-going.  Faculty member, Education Department member, advisor, mentor, creative projects contributor  are just a few  of the responsibilities that Spencer had taken on  at AMDA. Recently, Spencer had assumed a new position as the Academic Dean of the Critical Studies Department at AMDA LA. Spencer’s teaching included a diverse array of courses in both the academic and performing arts’ worlds. Some of the classes he taught included: English Composition, Creative Writing, Play/TV/Screen writing, Film Auteur. Spencer was known also for his guidance of students in the writing and development of original scripts for both the stage and film venues, ultimately including the actual development and production of short films.

Spencer’s own short films have been featured on Bravo and IFC, and he’s won many awards for his feature-length screenplays. Before he became a member of the AMDA faculty, Spencer was a full-time instructor, lead educator and pedagogical consultant for the B.S. and A.A. programs at the Fashion Institute of Design and Merchandising (FIDM) and for the M.B.A. programs at the USC Marshall School of Business. Additionally, he taught Shakespeare and directed productions at inner-city schools in Harlem and the South Bronx. He has also served as an official juror for the Palm Springs International Festival of Short Films, which qualifies recipients for Academy Award consideration. Spencer received his BFA from USC and his MFA from the Yale School of Drama.

Spencer Beglarian passed away on April 19, 2011 at 4:46pm. At the request of Spencer's family, we will be observing one minute of silence honoring Spencer Beglarian, beloved teacher, colleague, friend and brother.

Wherever you may be throughout AMDA Campuses in LA or NY, FIDM or USC - students, friends, colleagues and communities throughout the world are invited to join with us and Spencer’s family in observing this remembrance.

Details regarding additional tributes and services will be announced soon.