AMDA alumnus Marti Gould Cummings is a New York cabaret performer who has quickly made a name for himself. He currently hosts four shows a week in the city, bringing in some of the most sought after Broadway Stars as guests. After Proposition 8 was passed in California (a ballot proposition elimating the rights of same sex couples to marry), Marti co-founded the organization Broadway Speaks OUT to create a forum for those on Broadway to speak out on behalf of the LGBT community. Marti has interviewed a bevy of stars for Broadway Speaks OUT including Bette Midler and Rosie O'Donnell, and has produced and hosted several successful fundraisers. In a relatively short period of time on the scene, Marti has carved out a successful career for himself. We talked to Marti to get his take on the business and find out what it takes to set yourself apart in a sea of performers. 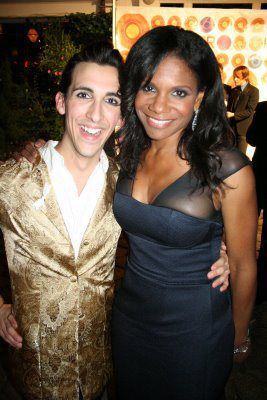 Where are you from?

I grew up on my family farm on the eastern shore of Maryland.

When did it become clear that you wanted to be a performer?

Ever since I can remember I was twirling around my farm staging productions in the living room and on the deck to my house. The moment I was able to put words to what this was for me, occurred when my cousins took me to see a local production of Annie. I was enamored watching these people on stage and putting music to how they were feeling. They were singing songs to emote their feelings of joy, sadness, thrill and fear...using music to emote when words were not enough and then using dance when singing was not enough. It was beautiful.

Why did you choose AMDA?

I chose AMDA because I wanted a program that focused solely on the crafting of a performer.

Honestly it was really difficult. I moved to NYC two weeks after high school when I was 17 years old. Being thrown from a small farm to the big apple was a major life change. I struggled a lot with balancing city life and school work but the teachers at AMDA, the class schedule and the routine really helped to shape me. Through that I learned to focus and study and how to become a disciplined artist. This business is cut throat and hard. You have to be on your toes, always looking out and keeping yourself sharp as a tack or you will not make it. Enjoy your time but remember that determination, focus, and preparation are key.

What were some of the most important things you learned while studying at AMDA?

I learned to balance my life. Manage my time wisely. Rehearse. Research. Arrive early, not on time and certainly not late.

Let's talk about life after graduation, what did you do next?

Directly following AMDA (the week I graduated) I went on a small bus and truck tour. After that I booked some work in small productions in NYC then landed a role in an off-broadway musical that was nominated for a Drama Desk Award. Then I spent a long time just auditioning and not really knowing what type of roles or acting I wanted to do. This is when I decided to branch out and explore making work for myself. I got into celebrity interviewing, nightlife, cabaret performing, and charity events. All this eventually led to the career I have today as not only an actor who has been featured in several TV shows and theatrical productions, but a host of four weekly shows featuring broadway performers, and a recording artist and comedian.

You are well known in New York amidst the cabaret scene and beyond, you have created such a niche for yourself. How did you go about doing that?

It really was all about networking and always being on my game. It took long hours and hard work to get where I am today. I am very grateful for all I have accomplished thus far in my career but there is always room to improve and grow as an artist.

What do you think sets you apart from other performers?

I take risks and really try to stay true to myself as an artist.

What has been your favorite performance moment to date?

I would have to say interviewing Liza Minnelli at The Drama Desk Awards in 2009 was pretty major! I also really love when I was performing in my first one man show I wrote "Marti Gould Cummings: Nothing Like a Dame" and my idol, Tony Award nominee, Justin Bond, came backstage before the show to tell me he was rooting for me and that he was a fan of mine. The final moment would be when Patti LuPone, who was sitting front row at my show, gave me a standing ovation during a performance and then came up on stage with me. That was life changing. I know you asked for one moment but all of these were goose bump inducing and life changing for me.

What were some of the challenges you have faced along the way?

I carry a lot of insecurities like most artist about whether I am talented, attractive, funny, worthy. These insecurities are what will bring me down and that is when I just have to focus even harder and really work hard on my craft. There are always going to be people waiting in the wings to replace you, so keep your head high and focus on the goal. This being said, always be kind and gracious to those around you. Be the friends, co-star, and employee that you would want to work with.

Did you have anyone in particular that you looked to as an example?

What advice do you have for anyone graduating and stepping out into the world of auditioning and performing?

Do not give up. There have been people in their 80's who have made their broadway debut. Keep at it and know there are many realms to this industry, research them and see what makes you happy. If you are not happy don't do it. We are in the business of entertaining people so be there to entertain. Have fun!

You are also very involved in your foundation Broadway Speaks Out. Why did you start it and what is the goal?

My ex-partner Anthony Hollock (from Broadway's HAIR) and I formed Broadway Speaks OUT as a way to give back to the people who form the broadway community, whether it be fans, patrons, crew, or actors. We felt that it was important to have our community reach out to the LGBT community to let them know the people who they look up to are working hard to support their equal rights. We have produced concerts and events benefiting The Ali Forney Center for Homeless LGBT Youth. Our annual gala A Very MARY Holiday has featured Tony Winners Laura Benanti, BD Wong, Sonja Morgan (from The Real Housewives of NYC) and over 50 broadway performers. We have successfully raised over $30,000 for the Ali Forney Center. BSO has also sponsored events for Marriage Equality NY, Space on White, HRC, and Broadway Impact. We have also hosted a talk show that has interviewed Oscar, Tony, Emmy, and Golden Globe winners from every aspect of the industry.

What is next for you? What is your career dream?

That is up to God and whatever comes my way I will be grateful for the opportunity to be a voice for others and to use my talents to make people happy.

If you weren't performing, what would you be doing?

Nothing, this is all I know how to do and all I want to do with my life. It is in my veins.

Thank you Marti. We look forward to seeing you perform in New York soon!

*Catch one of Marti Gould Cummings weekly shows in NYC*

Further information about Marti Gould Cummings and Broadway Speaks OUT.

You can purchase Marti's new single "Real Girl" on iTunes.