AMDA is honored to have two outstanding speakers at our October graduation ceremonies: Krystal Joy Brown and Chandra Wilson. 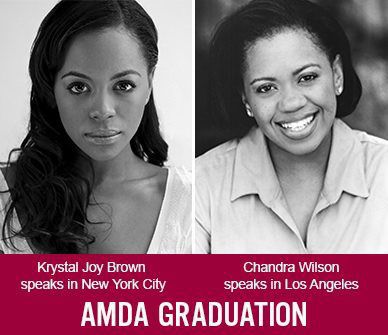 Krystal Joy Brown began her professional career at age seven after she auditioned for the Children of the Gospel Choir in Washington D.C., becoming its youngest soloist. At 16, when still in high school, she started a jazz fusion band and toured some of the largest music festivals in Europe, including North Sea Jazz Festival and Montreux Jazz Festival.

Krystal’s love for live theatre brought her to New York City, where she attended AMDA. Soon after graduating, she booked her first professional acting gig as Mimi in the national tour of RENT. Krystal made her Broadway debut as the Abe Lincoln/Dionne understudy in the Tony Award-winning revival of Hair, directed by Diane Paulus. She went on to originate the role of Ornella in the Alan Menken Broadway musical Leap of Faith as well as Josephine in the Susan Stroman-directed Broadway musical Big Fish. She received Fred and Adele Astaire Award nominations for both.

Her other credits include the Off-Broadway productions Falling for Eve and Calvin Berger. Krystal has guest-starred on ABC’s “Castle” and filmed pilots for Nickelodeon. She is an up-and-coming songwriter (with songs recently featured on ABC’s “The Neighbors” and “Mistresses”) as well as a budding novelist and columnist. Currently, Krystal is honored to be portraying her idol Diana Ross in the Broadway hit Motown: The Musical.

Chandra Wilson is best known for the role of Dr. Miranda Bailey on ABC’s hit drama “Grey’s Anatomy.” For her work as an actor and director on the series, she received the Screen Actors Guild Award, People’s Choice Award, four NAACP Image Awards and four Emmy Award nominations.

The Houston native began performing at age five at Theatre Under the Stars (TUTS) and, later, at Houston’s premier African American theatre, the Ensemble Theatre. She graduated from Houston’s High School for the Performing and Visual Arts, acquired her BFA in Drama from NYU’s Tisch School of the Arts, and spent four years training at the Lee Strasberg Theatre Institute.

Her New York career began playing Bonna Willis in The Good Times are Killing Me, for which she won a Theatre World Award for Outstanding Debut Performance. Broadway credits include Matron Mama Morton in Chicago, Dotty Moffett in Caroline, or Change, Gary Coleman in Avenue Q and Flossie’s Friend in the Broadway revival of On the Town. Other stage credits include The Miracle Worker at Charlotte Repertory Theatre, Paper Moon: The Musical at The Papermill Playhouse, The Family of Mann by Theresa Rebeck at the Second Stage Theatre, Believing for the Young Playwright’s Festival at Playwrights Horizons and Little Shop of Horrors at the Falmouth Playhouse. Chandra gave a Prism Award-winning and Emmy-nominated performance in Hallmark Channel’s Accidental Friendship. She can also be seen in the films Frankie and Alice, Lone Star and Philadelphia. On television, she played guest-starring roles on "The Sopranos," "Law and Order: Special Victims Unit," "Sex and the City," "Third Watch," "100 Centre Street," "Cosby," "Law & Order" and "The Cosby Show."

Chandra’s philanthropic work includes being national spokesperson for the Downy Touch of Comfort program, which distributes handmade quilts from Quilts for Kids to children staying in hospitals across the country. She is also national spokesperson for the Cyclic Vomiting Syndrome Association (CVSA), which raises awareness of CVS and Mitochondrial Diseases. She annually funds the Sermoonjoy Scholarship which provides four-year college scholarships to two Theatre Department graduates from Houston’s High School for the Performing and Visual Arts, and two graduating seniors with a financial need from NYU's Tisch School of the Arts Undergraduate Drama Department. She also funds the Sermoonjoy Fellowship, which provides two annual fellowships to mid-career actors looking to receive training in a specific area of technique. More info about these programs.