What a way to culminate your debut performance on Broadway—with a Drama League, a Drama Desk, an Outer Critics Circle and (biggest of all) a Tony nomination for her role as Billie Dawn in "Born Yesterday." New York Times theatre critic Charles Isherwood wrote of Nina Arianda’s performance, “With her luscious pout and sweep of peroxide curls, Ms. Arianda banishes Holliday’s pop-eyed, chirpy naïveté to evoke the surly molls of 1930s gangster flicks. Her Billie Dawn, streetwise and complacent in her illiteracy, is like a cross between Jean Harlow at her tough-blondest and the pop singer Cyndi Lauper, with her Queens-bred rasp.”

The 2004 AMDA graduate previously received rave reviews for her breakout off-Broadway performance in “Venus in Fur.” In 2010, she received  a Theatre World Award, a Clarence Derwent Award and a Outer Critics Circle Award for Outstanding Actress in a Play as well as a Lucille Lortel Award nomination for Outstanding Lead Actress. She's making waves on the screen in addition to the stage, and can next be seen in Woody Allen’s “Midnight in Paris,” and Vera Farmiga’s “Higher Ground.” Nina recently wrapped Brett Ratner’s upcoming film, “Tower Heist.” 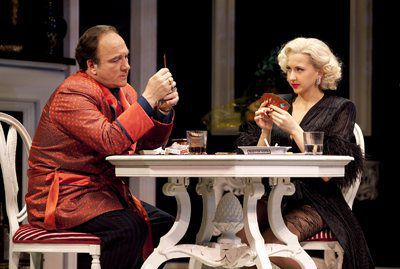